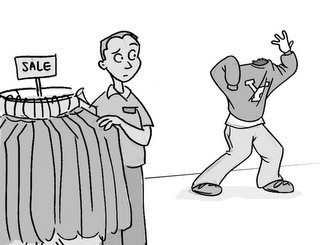 I have a gray BYU sweatshirt. It is no longer the shade of gray that it was when I bought it. Now it's more earthy, by which I mean it's brown and kind of gross. But I need a BYU sweatshirt so I'm easily identified by other Mormons when I go to Disneyland... which is weekly. So when I heard that the BYU Bookstore was having a sale on BYU sweatshirts (probably because of their football team's recent Las Vegas Bowl performance), I decided the time had come to find a replacement.

For those of you who don't know, and for this story to make sense, you should know that I have what is known as a "Garn Head." I am part Garn through my mom's side of the family, and I know which part is the most Garn... and that's my giant head. Most Garns have them. I have to special-order hats, because "One Size Fits All" doesn't fit me. So before my class last night I went to the BYU Bookstore in search of a new sweatshirt, accompanied as always by my giant Garn head.

As I stumbled blindly across the clothing section, running into a mirror and nearly knocking over a sale rack, I considered the letters "XXL" and how they clearly did not reflect the size of the neck hole. It seems the "zip up" sweatshirt is intended for me... like a draw bridge that opens to allow ships to pass freely through. If only I had known that before I forced the sweatshirt on, much of the destruction could have been avoided. But thanks to the jaws of life, I didn't have to buy the sweatshirt. It's still on the floor there in the Bookstore... its neck hole far too wide to be accomodated by any hanger this world has known. Not a proud moment for me. The Garn Head strikes again!
Posted by S.T. Lewis at 8:55 AM

Oh - poor Shane! Unfortunatly our future children will probably acquire the same head. Apparently it's the most dominant gene known to man.

Holy crap is your head ever big.

I have no idea what to say, but since you seem to want comments about the siz of your head, let me suggest career oppurtunities, in case the cartooning doesn't work out.

Mascots! Mascots always have huge heads. It doesn't even have to be for a sports team. Think of the new Burger King ads on TV. The King has a whopper of a head.

Large head to hold all the extra brain power. Lucky Garns, have all the smarts AND looks!

Shane…I bet I have you beat on the whole big head thing. I do not mind the big head so much as the thought of what it will look like when I loose my hair.