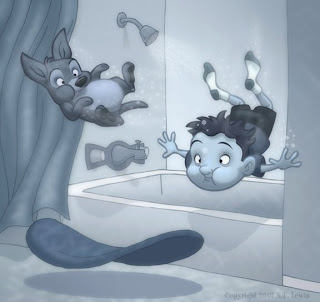 As a kid I had glorious visions of filling up our entire house with water and swimming from room to room. It never bothered me that most of my possessions would be destroyed in the flood or that my family would immediately die from electrocution if someone were to turn on the TV. Even knowing that the lack of breathing would only allow me to enjoy my aquatic wonder-home for about a minute before I drowned didn't stand in my way. All imaginable impossibilities aside, there was only one reason I never actually turned on all of the faucets and flooded the house. You guessed it... sharks.

Heaven knows, as soon as your house if full of water, it's only a matter of two or three minutes before sharks show up. And despite what shark experts keep telling me, sharks ARE mindless, eating machines.

Now that I think about it, though, it's not just incoming sharks that sour me on this idea. I've just realized that a small portion of my house-pool would inevitably be made up of at least some percentage of toilet water. So if it weren't for sharks and toilet water, this would be an excellent idea. But as reality stands, I don't think I'll flood my house on purpose... probably.
Posted by S.T. Lewis at 5:01 PM 30 comments: 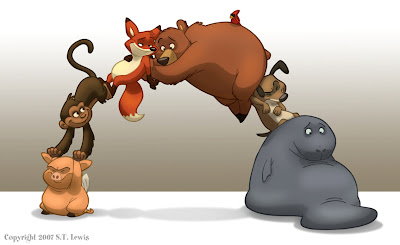 Unlike the boastfully extravagant St. Louis Arch, which is 630 feet tall and a predictably boring 630 feet wide, the S.T. Lewis Arch stands a reasonable eight-feet tall and is roughly three manatees wide. No one likes a "show-off" arch, and I'm guessing that's why so many people Google "St. Lewis Arch" instead of Googling the more popular, similarly named "St. Louis Arch." It was those Google-using, spelling bee champions who inspired me to create my very own arch. But unlike the one in Missouri with its cold, stainless steel, my arch is made out of the animals I most like to draw... and a cardinal. You like that, St. Louis? Bring it.

If you're familiar with my blog, you know that I make fun of Google searches from time to time. Here are some recent Googlings I've enjoyed:

I love that last one. Google's a magic mirror now? I guess you could just search for "shark" and then click on "images," but where's the feeling of a royal decree in that? And you just want to see the ocean sharks? So no "non-ocean-going" sharks, then. I guess that's pretty specific. "Things," on the other hand... maybe a little vague. As for the rest of the list... cheetahs got endangered when lots of them died. To bread a chipmunk, dip it in milk and then roll it in flour and bread crumbs. Flying pigs don't exist, so based purely on that fundamental logic, I would guess that a flying shark is going to taste better. However, managing to get a taste of a shark while it's flying may prove to be difficult. Good luck with all that. And lastly, a boxing kangaroo stands for truth and justice... maybe some other stuff. It's hard to say because they don't speak, but I like to think they're not just boxing without a purpose. 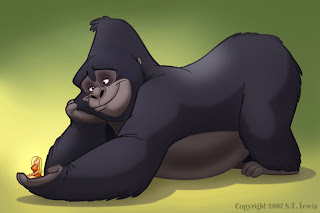 Giant gorillas make really good pets if you live on an island where dinosaurs are trying to eat you. If you live anywhere else, a giant gorilla is about the worst pet there is... unless you count cats. No pet is worse than a cat.
Posted by S.T. Lewis at 4:59 PM 13 comments: 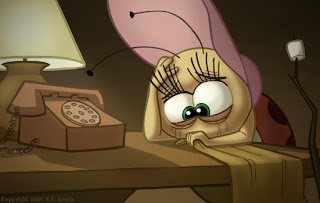 If you're familiar with Sesame Street's classic "Ladybug Picnic" segment, you already know that twelve ladybugs attended the picnic for an afternoon of sack-racing, rope-jumping, and the inevitable whine-a-thon concerning the over-pricing of furniture and rugs. The ladybugs seemed like a fairly likeable bunch, but then it occurred to me... unless fate is repeatedly crossing my path with the paths of the exact same ladybugs, there are quite possibly hundreds of ladybugs out there... or at least more than twelve. So what about all the ladybugs who didn't get invited to the exclusionary, elitist picnic? Still waiting by the phone... crying... thinking of "knock-knock" jokes they might have told. What about them? I'm beginning to think that that fire wasn't an accident. (The fact that they had marshmallows kind of tipped me off).

Sesame Street is the best show ever for kids, or at least it was before Elmo moved in and ran Grover out of the neighborhood. I know some of you disagree because your kids like Barney or the Wiggles. Yeah, well - they'd probably like rum if you gave it to them too. That doesn't make it right.
Posted by S.T. Lewis at 11:37 AM 23 comments: 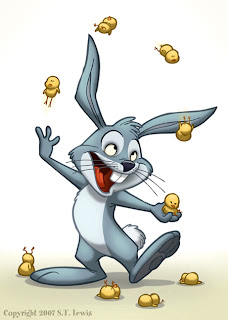 Once again I've drawn something that caused my wife to say, "I think you need therapy." She's serious too. But you see, drawing is the therapy. Now that I've drawn this semi-violent scene, I don't have to try it in real life with real chicks or real bunnies. The violent tendencies are relieved, and nobody's hurt. Therapy complete. Thanks heavens I have art as an outlet... I shudder at the thought of how innocent chicks may have suffered otherwise.

I think it was the chicks on the ground that really bothered her, but I've tried juggling, and it's hard. I'm impressed the rabbit still has more than half of the little guys in the mix. Instead of being critical of what he's doing wrong, let's just celebrate what he's doing right, because that's some fine juggling... especially for a rabbit.
Posted by S.T. Lewis at 12:35 AM 33 comments: 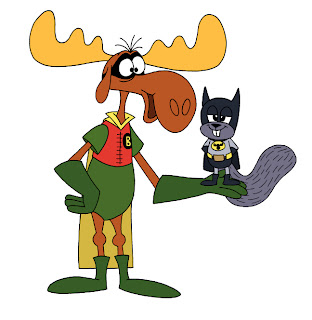 I've given up using food for inspiration... now I'm just combining TV shows I liked as a kid. It's still not creative, but at least it doesn't make sense.

I drew this for this week's Toon Club topic: Rocky and Bullwinkle. I hope next week's topic is "Batman and Robin," or I'll have to draw something completely new. I think I speak for me when I say, "Enough with all this drawing!" Check out my niece's drawing of Rocky on Toon Club Jr. It's the coolest!
Posted by S.T. Lewis at 12:50 PM 5 comments: 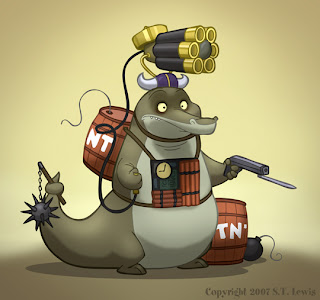 As you may already be aware, Battle Gators do not exist. What troubles me most about this fact is that all the supplies you would need to build a Battle Gator DO exist. Assuming you don't have a history of violence or terrorism, it would only take four or five days to gather the necessary weapons. And then, what... maybe ten minutes to strap everything to an alligator? In less than a week of very minimal work, I could possess the ultimate weapon. But alas, I'm lazy, and I haven't a single alligator to my name. Oh well... a man can dream (which is exactly why I take so many naps).

You should have seen the macaroni and cheese I traced to come up with this thing.
Posted by S.T. Lewis at 7:35 AM 10 comments: