I haven't drawn anything new for my blog in a while, so I made this collage instead. I'm consiering it my "Greatest Hits." Just like bands who have disappeared for a while but want everyone to remember they still exist, I'm repackaging some old material and hoping you're willing to pretend it's "new." And just like a "greatest hits" album has one new song thrown into the mix, I've added one new drawing to this that has never appeared on my blog before. Maybe finding it will be a fun way to keep everyone busy until I get around to posting something that's actually new. It's like "Where's Waldo" if you had no idea who Waldo was or what he looked like. Fun!

Thanks for coming to my blog... hopefully something new will be on the way soon. If not, I'll just move a few pigs around on this thing and post it again. "Greatest Hits: Volume 2." Sweet.
Posted by S.T. Lewis at 2:30 PM 25 comments: 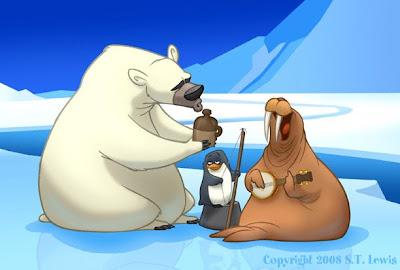 As a young child I was introduced to the wonderful world of jug bandery by Disneyland's Country Bears and Emmet Otter. I've been a fan of household-object-and-appliance-made music ever since. (Before I continue, I'd like to welcome all of you who found your way here by googling the word "bandery," which, sadly, is not a word.)

I like lots of weird music. I used to just pretend to like weird music because I thought it was funny to annoy people who had to travel in the same car as me. Then somewhere along the way, my mockery of such music turned into a kind of misguided fondness. There are tons of songs on my iPod that you don't know by artists you've never heard of... like The Chad Mitchell Trio, Bread, The Sons of the Pioneers, Loggins and Messina, and, well... Emmet Otter. Where would I be if Emmet had never put that hole in the washtub? Not in the happy place I am where bears play corn jugs... which is the only place I care to be.
Posted by S.T. Lewis at 10:35 PM 24 comments: 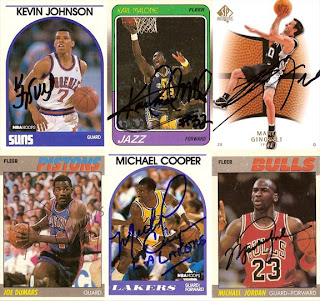 I haven't had time to draw anything lately because, much to my wife's dismay, I'm way too interested in the NBA Playoffs. I plan to get back to drawing again when we get into the later rounds and there aren't two televised games each night. Until then, visitors to my blog and my wife are going to find me very boring. Sadly there's no escaping that.
Posted by S.T. Lewis at 10:45 AM 14 comments: