A Sheep in Wolf's Clothing

I have some problems with the phrase "a wolf in sheep's clothing" - some serious, mental problems. That ridiculous saying is draped in flaw. I've seen a lot of sheep in my life, all over the world, and not a single one was ever wearing clothes... not even so much as a hat. Unless there's a cult out there somewhere that dresses farm animals in people clothes, I can safely assert that all sheep are naked all of the time.

A sheep whose wool has been sheered appears to be more naked than a wool-covered sheep, but neither of them is "clothed." If you shaved all of your dog's hair and covered yourself with it, you wouldn't say you were wearing your dog's clothes... you would say, "I'm a disgusting individual with no foreseeable hope of marrying." You wouldn't have to say that, though. People are intuitive about things like that... they would know.

So what have I drawn here? A sheep in wolf's clothing? Come on - let's call it what it is... a "sheep under wolf's carcass." It doesn't sound as charming, but accuracy trumps eloquence. Hey, look! I just found a worse saying!
Posted by S.T. Lewis at 3:30 PM 22 comments: 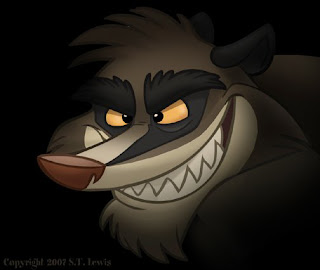 A year ago I posted something on my blog about badgers. That drawing looked kind of rushed, so I drew this new, meaner-looking badger using the same basic design, only this time the badger had no body. I tried to mask the lack of body by throwing one together in Photoshop. This took about four seconds and looked awful. So instead of re-doing it or taking the time to draw one, I just darkened it all into obscurity. Sometimes the most creative thing about art is finding ways to not do art.
Posted by S.T. Lewis at 1:20 PM 12 comments: 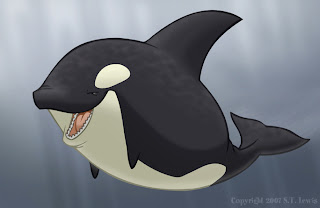 Because of their natural color markings that look like smile lines, killer whales always seem happy. Sharks are ugly and look mad. So even though both animals have dagger-like teeth that could easily rip my flesh from my bones, I find myself less afraid of the one who would look happy doing it.
Sea World has also influenced my feelings. At the Shark Encounter, ominous music plays in darkened caverns while sharks eerily encircle the exhibit's guests who find themselves trapped in tunnels well below the surface. At Shamu Stadium, cheerleaders in wet suits dance around to Brittany Spears classics while killer whales leap from the water, playfully launching other cheerleaders into the air. It's hard to misread the message Sea World is sending.
And the last reason that sharks are scarier than killer whales... it's impossible to trust a fish.
Posted by S.T. Lewis at 11:55 AM 31 comments: 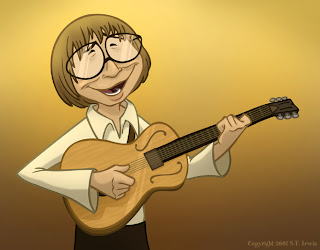 Even if you don't like him or his music, you can't argue that John Denver's the coolest person who was ever born with the last name "Deutschendorf." Sunshine on his shoulders made him happy. Guest appearances and Christmas specials with the Muppets made him a star.
Posted by S.T. Lewis at 9:15 AM 37 comments: 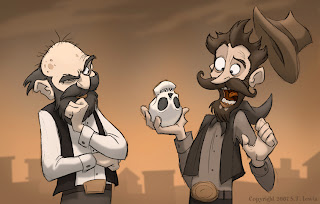 I drew these guys while trying to put together my "wanted" poster, but they didn't seem like criminals, so they became abandoned concepts instead. They were about to become part of my giant stack of discarded sketches when I noticed that the two drawings kind of fit together side-by-side. So this scene doesn't make sense because it was never meant to be a scene. All the same, here's some "forced sense" for it:

While the older gentleman on the left is trying to figure out why he has fewer fingers on his left hand than everyone else in town, the guy on the right stares in hat-floating amazement at the remains of a man who was born with his head upside down. Anatomy... not a popular subject in the Wild West... or for me.
Posted by S.T. Lewis at 7:55 AM 17 comments: 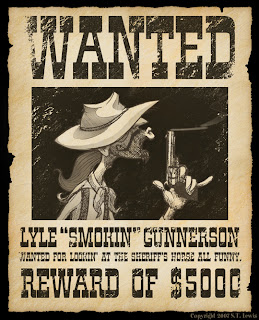 I drew this for the most recent topic on the Avalanche blog: "Wanted in the Wild West."

I never realized how much fun it is to draw cowboys... all the more reason to bring a sketchbook to the state fair next month. That place is a sketchbook goldmine with its pig races, bears on unicycles, countless wandering fair-going weirdos, and the opportunity to see the world's tallest horse for just fifty cents. Yeah, I know if I'm there, that makes me a "fair-going weirdo" too. But at least my belt buckle's smaller than my head.
Posted by S.T. Lewis at 2:20 PM 14 comments: 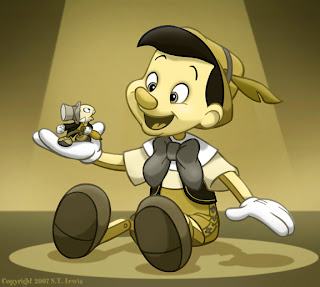 I've mentioned on my blog before that Pinocchio is my favorite movie ever. Then I said the exact same thing about Mary Poppins. Clearly I don't know what I'm talking about or what I think. For the purpose of sounding like I know my own opinion, I'm going to say that Pinocchio is my favorite animated movie ever. For Toon Club's Pinocchio topic, I finally had a reason to try my hand at drawing Pinocchio again. My first attempt was... well, reviews have been mixed. This was a lot of fun to draw... especially the "Jiminy Cricket" part.

Jiminy Cricket is the coolest. He taught me that, if I don't ride my bike into oncoming traffic, I might live to be 23. I'm getting close to 33 now, so I must have subconsciously heard the second verse too. Actually I just don't ride a bike at all... which is the best way to avoid bicycle-riding death. I'm no fool.

I hung Jiminy Cricket on the rear-view mirror in my car... but not in the "Old West execution" style like it sounds. It's actually a Christmas tree ornament, and Jiminy's hanging from his umbrella... not his neck. I put him there because I thought having a conscience nearby might curb my road-rage. Hasn't really worked, though. If you're not passing anyone, get to the right! Even "plastic Jiminy ornament" knows that.
Posted by S.T. Lewis at 8:33 AM 19 comments: 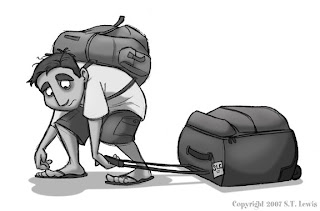 Vacation days are too few. If I had 120 vacation days a year, I would probably allow myself to spend a few of them relaxing at home. I could certainly use that kind of break. But because vacation days are so limited, I refuse to waste them on boring activities like "resting" or "breathing." In fact, I can't think of the last time I had a day off that wasn't considerably more exhausting than going to work would have been.

This drawing shows how I feel when I get home from a typical vacation. Now that I think about it, if I had 120 vacation days a year, I'd already be dead. It would just be more time I'd refuse to waste. 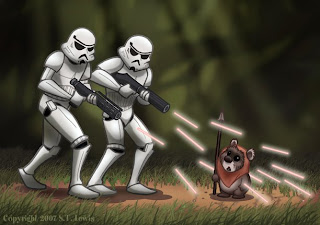 I drew this for the Avalanche blog... the topic was Stupid Star Wars Characters. I've always loved the old Star Wars movies, but even as a kid I remember being a little disappointed that the final battle between the Empire and the Rebels came down to a forest shoot-out between aim-disabled Stormtroopers and teddy bears with sticks. If you were picking teams for a galactic battle, I'm pretty sure the battle would be "locked" long before any Ewoks or Stormtroopers were drafted.
Posted by S.T. Lewis at 9:20 AM 21 comments: