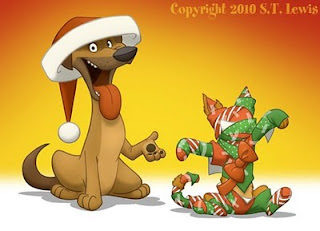 There's so much that I love about Christmas... the music, the lights, the food, the tree in our living room, the TV specials and movies, the day off of work, the Carpenters. But I think what I love most about Christmas is that it's yet another day of the year that we don't have a cat.

The Hap-Happiest Season of All 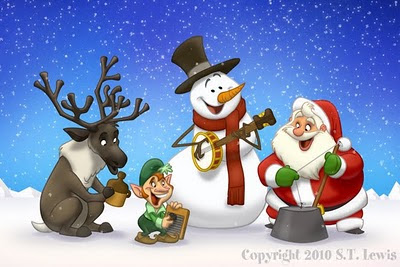 In 1963, Andy Williams released a song that has become a holiday classic: “It’s the Most Wonderful Time of the Year.” Since then it has also been recorded by Johnny Mathis, Harry Connick Jr., Amy Grant, the Muppets, and a bunch of other people who we forget exist the other eleven months of the year. What I find most surprising about this song is that, as many times as it's been re-recorded, no one has ever tried to improve the lyrics. They all just sing what’s been sung before without considering how dumb the words are. I think it's time someone examined these lyrics more closely than Donny Osmond or Gonzo ever did.

According to the song, one of the reasons the holiday season is so wonderful is that “everyone’s telling you, ‘Be of good cheer.’” Have you ever been cheered up by someone telling you to cheer up? Of course not. If you want to make someone smile, you do something nice for them or trip down some icy stairs in front of them. Telling someone to “be of good cheer” raises that person’s happiness level about the same amount as telling them you're going to drown a pillowcase full of puppies if they don't smile. In either case, they're only smiling to get you to leave them alone and go away... and possibly to save some puppies, but not because you cheered them up.

Next on the list of bad lyrical choices... jingle-belling? Mistle-toeing? Is “wassailing” responsible for this slippery slope? Just because someone turned a Christmas noun into a verb for their song once doesn’t mean you have to do it multiple times in yours. The guy who wrote this song needs a solid candy-caning.

As for "marshmallows for toasting" and "scary ghost stories"... I guess every family’s entitled to their own Christmas traditions, but are you sure you’re thinking of the holiday season here? Because what you're describing is camping… or possibly Halloween. You may be thinking, "But A Christmas Carol is kind of a 'scary ghost story.'" All right, but the song refers to "scary ghost stories," so name the rest.

And speaking of "the rest," "It's the Most Wonderful Time of the Year" was co-written by George Wyle, the guy who co-wrote the Gilligan’s Island theme song with Sherwood Schwartz. Originally that song ended with the words, "...and the rest, here on Gilligan's Isle." And the rest? They only needed to mention two other people. That's like saying the seven dwarfs are Doc, Grumpy, Dopey, Sneezy, Sleepy, and the rest. They later replaced that phrase in their song with, "The Professor and Mary Ann." It just made more sense. So if you can change the poorly co-written lyrics in the Gilligan's Island theme song, then why not offer the same courtesy to a song that has somehow managed to become a Christmas classic?

I'd rewrite the lyrics myself, but I just wasted all of my time making fun of the old ones. Maybe next year.
Posted by S.T. Lewis at 9:40 AM 7 comments: 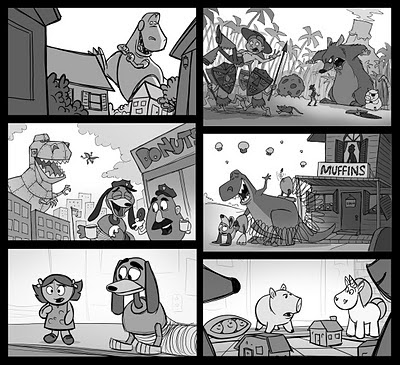 Way back in June, Toy Story 3: The Video Game was finally released. I had been working on it for a couple of years, but even after all that time and work, I forgot to mention its release on my blog... until now. Here are six of the 1,800 storyboards I did during the game's production... and that's not just an exaggerated number either. I still have all of them. Clearly these boards aren't in sequence, and some of them were never used for anything, but I wanted to share them anyway... because these are a few that I actually toned. Ah, wonderful grayscale!
I'm very pleased with the way this game turned out... especially after watching my nieces and nephews become addicted to it. The "Toy Box" area is especially fun. That's where you just run around an old Western town as Woody, Buzz, or Jessie, doing whatever you feel like doing. If you want to shoot Bullseye with a rocket blaster for ten minutes straight, no one's stopping you... unless you're my nephew. After ten minutes I stopped him, because enough's enough! I also wrote a lot of the dialogue for the game, so if Hamm sometimes sounds like he's reading my blog to you, that's why.

I did these three drawings for a commercial that we made for Sony. They wanted a video that would highlight Zurg as a playable character in the Play Station 3 version of the game, and they left the rest of it up to us. I thought it would be funny to show Zurg having the time of his life, laughing it up like a crazy person, while Woody and Buzz watched in uncomfortable silence. In the final version, Zurg walks over and hugs the two of them. It works a lot better that way than it did in the boards, so three cheers to whoever added that part. 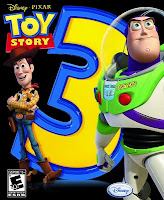