Well, it's nearly another 4th of July... the day we celebrate our country's independence by blowing stuff up and starting wildfires that threaten our homes and our lives. Irresponsibility with fire is what freedom is all about... so hip hip for 230 years of independence and hooray for flame-retardant clothing!

This week's Toon Club topic was "Patriotism." I decided to branch out a little from the normal patriotic symbols and create a new one. Considering the endangerment of the bald eagle, it's time we shift our focus to a different animal... perhaps one whose livelihood won't be threatened by our freedom-loving, fireworking, forest burning ways. It's time we look abroad for a national symbol - one we can't kill off quite as easily. And so I present... 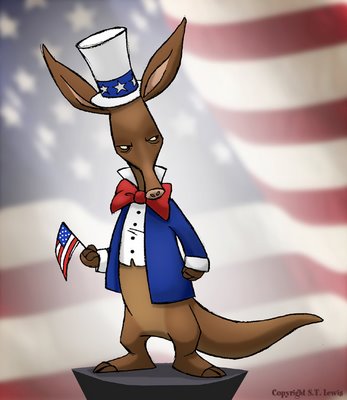 Of unlikely interest to many if not all... the word "aardvark" means "earth pig," indicating that what we know as the common pig is possibly otherworldly. All the more reason to fear them and eat bacon. 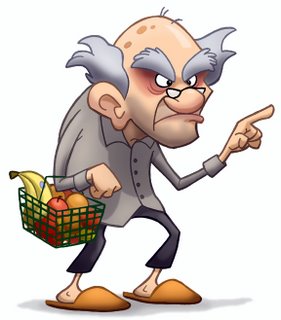 The Grocestapo is the elderly gentleman in the grocery store who glares at you if you speak too loudly, or angrily scolds kids who run. To him, a grocery store has many unwritten rules of conduct, and he plans to enforce them... even the ones only he knows... which is most of them... or all of them.


"You have to buy any loaf of bread you touch," an old man once tried to teach me when I decided I'd rather go with the sourdough. I didn't listen to him, because the Grocestapo has no authoritative power. He's just an angry, old jerk.

After that many years of people running into you with grocery carts, and seeing your favorite brands and products discontinued, I suppose it's no wonder there's a Grocestapo in every grocery store I've ever been to.

Should you be wearing slippers in a grocery store, Grocestapo? Seems like you'd be on top of something like that.
Posted by S.T. Lewis at 11:14 AM 10 comments:

The Day the Music Died 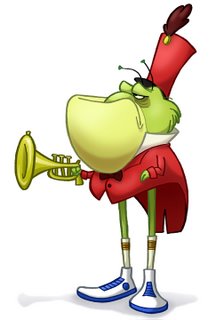 This week's Toon Club topic was "Alien Life Forms." And of everything I could have drawn... I came up with this? Let me explain how this ugly thing came to be.

On about my tenth sketch, I found a face I kind of liked, so I went with what you see here. When I tried drawing an alien-ish gun for him to hold, I thought, "What kind of gun is that? It looks like a trumpet." So I made the "gun" a little more trumpety, threw a marching band uniform on him, and called it done.

Once again - an idea is born from my lacking ability to draw what I mean to draw. That seems to be my secret. It's amazing how creative you start to seem when your inabilities force you to make concessions. And as long as I'm making concessions, I could really go for a churro and a Coke.

Beware marching band... someone among you doesn't belong.
Posted by S.T. Lewis at 9:56 AM 5 comments: 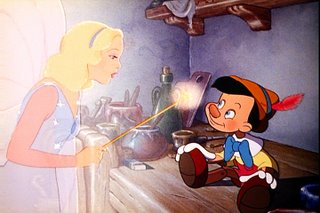 Last night I saw a special on TV: AFI's 100 Years... 100 Cheers. It was the American Film Institute's countdown of the most inspiring films of all time. And of the 100 movies on the list, only one was animated. You've probably figured out which movie that is already, because you're a genius, and also because I've provided a few subtle hints. That's right... wedged in there between Forrest Gump and Star Wars at #38 was my favorite movie ever: Pinocchio!

Pinocchio was REALLY inspiring to me on a personal level. Every kid loves cartoons, but that movie was the one that made me never out-grow them. Everyone I know who works in animation has a movie or a cartoon that inspired them to get into that field. Pinocchio is mine. I love it! The story, the animation, the backgrounds, the music... all wonderful! The first CD I ever owned was the Pinocchio soundtrack. Second... John Denver and the Muppets: A Christmas Together.

In case you're interested, the full list is available on AFI's site. Number one on the list was It's a Wonderful Life. I guess I can accept that, even though it's no Pinocchio. Also worth noting... I hit the list at #53. Dead Poet's Society is more inspiring than me? Hardly.
Posted by S.T. Lewis at 10:39 AM 2 comments:

PIXAR has done it again! If you haven't seen Cars yet, you can still read this. I won't give anything away. I saw Cars twice on its opening day, and to sum up... I absolutely LOVE it! PIXAR's track record remains perfect... the best movie studio ever. John Lasseter for President! I even wore a Hawaiian shirt to work today in honor of him.

The movie is funny, sad, sentimental, touching, sweet, good, entertaining, and everything else that a movie should be. The voice casting was perfect, the backgrounds were beautiful, the lighting gorgeous, the detail amazing... and I can't believe the animators were able to get so much life and expression out of CARS! But above all, the thing that has made all of PIXAR's movies so great... STORY!

This is the part where I don't give anything away. Too bad - there's so much I could say. Go see it now! And don't leave before the credits are done like most of the people in our theater did. I was happy to see a tribute to Joe Ranft... a key reason this movie's story was so full of heart and fun.

I would love to get to work with the PIXAR story people some day. Story's what I do and what I love, and no one does it like them. I need to get in there and learn from them before any of them leave, taking their story sense with them. They have a storage shed full of my portfolios... eventually I'll draw something to get their attention. It just hasn't happened yet.

PIXAR continues to save animation... my favorite of all forms of entertainment. Until I finally am given an opportunity to be a part of PIXAR, I remain one of their biggest fans. Hooray for them! Hooray for Cars!
Posted by S.T. Lewis at 1:08 AM 6 comments:

Racing is for Sissies 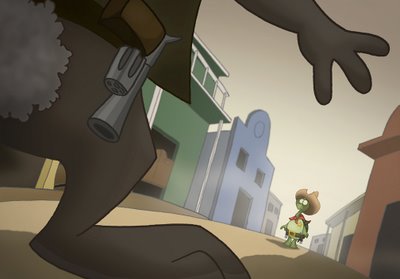 This is my recent Toon Club drawing for "The Wild West." I'm hoping someone picks "The Tortoise and the Hare" soon so I can re-post this and use the time I save for important things like killing snakes. Which reminds me... the death toll has increased to three.

It has been brought to my attention that the hare's gun is considerably flawed. To begin with, there are no bullets in his 4-shooter. I think the larger hurdle he faces is his gun's "no trigger" feature. I don't have a lot of experience with guns in my life. I figure my drawing resembles a gun more than the thing I used to use to shoot ducks on Nintendo. Hey, I'm a storyboarder... go to the design people if you want precision. I offer poorly executed sketches of mildly entertaining ideas... nothing more.

The Sandwich of Monte Cristo 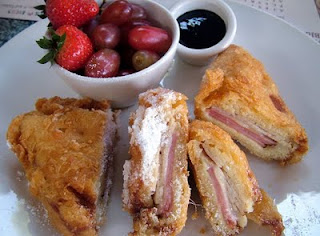 I love the Blue Bayou Restaurant at Disneyland - that's the restaurant you sail by at the beginning of The Pirates of the Caribbean. The setting is great, but the only real reason I go is the Monte Cristo Sandwich. It's the best sandwich ever! "Mmmm" is for "Monte Cristo."

Since it's the best sandwich to ever exist on the planet, I was willing to pay $10.99 for one in 2000. Last December when I was there, I was still willing to pay $12.99. When The Pirates of the Caribbean re-opens later this month, so will the Blue Bayou. The Monte Cristo Sandwich will cost $18.99.

$18.99... for a sandwich? Years ago the sandwich came with an apple. When the price went up, the apple was replaced by a small side of pasta salad. The new, crazily-priced sandwich will come with soup or a salad and two side dishes. If one of my side dishes is "gold coins," I suppose the new price is somewhat reasonable. The sandwich alone is quite filling. Who wants to pay that much for a ton of food that's just going to end up on the floor of a Big Thunder Montain train car?

Obviously people will want to share such an enormous meal. That's why they've added a new "plate splitting" charge of $4.99 for people who had hoped to make the sandwich affordable in that way.

I would prefer that Disneyland hire someone to beat me up and take my wallet at the front gate, then charge reasonable prices for things in the park. Either way they end up with all my money, but instead of resenting the Happiest Place on Earth, I'd just dislike the guy who kicked my crotch and cracked my skull on the way in.

At least gas prices are reasonable, or how could I ever afford to go to Disneyland?
Posted by S.T. Lewis at 7:59 AM 7 comments: 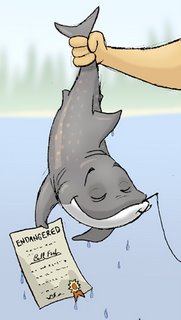 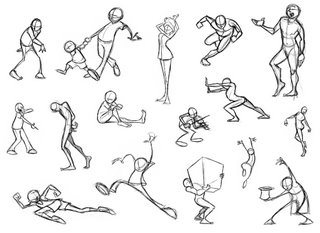 I haven't added anything to my blog in over a week. I was out of town. I'll get back to this soon. Until then, enjoy some of my old gesture drawings... if you dare.
Posted by S.T. Lewis at 8:18 AM 4 comments: