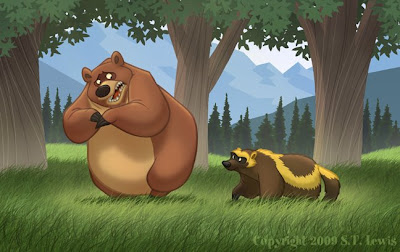 Wolverines are extremely dangerous. For their size, they are quite possibly the strongest animal on the planet. They have been known to drive wolves, cougars, and bears away from their kills, and in some cases, they have even gone after moose, meaning they are willing to attack animals that are more than five times their own size. That would be like me kicking a grizzly bear to retrieve my bacon burger.

Before you defend the honor of wolverines by calling me names, let me explain something. Just because wolverines are dangerous doesn't mean they belong in prison. In most cases (and I'm not talking about the dog who you love like your own child), animals aren't mean or nice. They're just animals... looking for food while trying to avoid becoming food themselves. They don't attack humans because they dislike us or because they think it's funny when we cry. Their occasionally aggressive actions are fueled by self-preservation, because sometimes the best way to get something to leave you alone is to bite it, and the best way to alleviate hunger is to eat whoever's around. The desire to stay alive isn't mean or nice. It's just selfish. And it's okay to be selfish when you're an animal. (Again, I'm not talking about your dog who you dress in sweaters... he's totally nice).

If you think I'm wrong and that wolverines aren't dangerous but are as kind-hearted as sweater-wearing dogs, go find some wolverines and throw pine cones at them while you're wearing a suit made of deli-sliced ham. I was going to say "a home-made suit of deli-sliced ham," but if you can buy one in a store, do that. No sense wasting your last few hours of life making a death suit out of deli meat.
Posted by S.T. Lewis at 12:02 PM

I hear death suits of deli meat are on sale at Walmart until Memorial Day, but then again I like sewing so I'll probably just make mine. Great post Shane! To tell the truth I didn't know what wolverines looked like and I even have a college degree. What are they teaching in schools these days anyway? Certainly not wolverines. That's why I come to your blog- to be educated. :) Thanks. btw- Seth and I rented "Discovery Channel Shark Week" from Red box and I thought of you the whole time and later when we cried ourselves to sleep for fear of ever being suck out in the ocean with hundreds of hungry sharks.

Karalenn Hippen said...
This comment has been removed by the author.
April 20, 2009

I meant "stuck" instead of "suck". I stuck at typing.

awesome bear and wolverine characters, that grass is really cool also however you made it.

My grandmother used to have that last sentence embroidered on her wall....

LOL!! Wolverines are really aggressive animals! I'm glad someone finally blogged about it!

Hello! I have been looking at your blog for a while now, and just wanted to write that your drawings are fantastic!! They are painted in photoshop, right? And do you paint the lines manually or is there some kind of trick? Again great drawings and cute little stories in each picture!! Kim

I happen to know that wolvrines can be friendly ANY ANIMAL CAN BE NICE! DOGS WERE ONCE WILD ANIMALS THAT U SAID CAN'T BE NICE!!!! Wolverines just want their food to survive just like we do. Everything in this world kills to live whats so MEAN about that. Have u ever met a wolverine if u haven't then I wouldn't go flapping my mouth off about stuff off the internet that contains no proof if I were u bub. PLUS did u ever think that maybe their scared!

Ur such an american, u judge what u cannot understand, like my native american ancestors. Put urself in the wolverines place and think "What would I do if strange people who sometimes hunt me come near?" DUUUH ATTACK!!!! U should do what the natives did, spend time with the wolverines urself and give them a chance. EVERYTHING has a kind side.

TRY NOT BEING A STEREOTYPICAL JUDGEMENTAL AMERICAN SOMETIME EH!!!!!!

Sorry, Silver Fox... the "spelling-inept lunatic" angle has already been utilized by the killer whale in a far more convincing and entertaining fashion.

Silver Fox...
I really hate to be a nay sayer, but this whole trip you went on about being judgmental seems very judgmental to me. Are you angry or do you just LIKE shouting with typography? lol