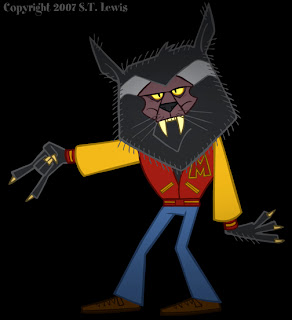 I remember the night that Michael Jackson's Thriller video premiered... my whole family gathered together to watch it on TV. And right next to that in my memory are all of the times I ran through our upstairs hallway from the zombies and werewolves I figured were lurking in the closets up there. Now that I have a job in story-telling, an imagination is a valuable thing to have. But that same imagination is a curse to a kid, as evidenced by a childhood full of nightmares. Sharks, snakes, Michael Jackson... I missed out on so much sleep as a kid because of terrifying monsters like these. I learned years later that Michael Jackson was actually supposed to have been more scary as a werewolf... I totally missed that.

Happy Halloween, everybody!
Posted by S.T. Lewis at 9:20 PM

I wanna say that thats "Bad" but its more of a thriller!


KIK ASS POST!! Im listenin all day to michael in the mornin just because you rule

"I have something I wanna tell ya."

Awesome post. What a great charicature of the monster.

I still see the zombies chasing me up the stairs at night, and yet, I love it.

This is a great post. That Michael Jackson werewolf is hilarious! What a mane.

And I totally tap into those kid fears when I'm dry on ideas for a story.

There's that moment in the movie when Michael is facing away from the camera and he turns around really fast to reveal that he's been zombified... yeah, that scared the crap out of me. I was a pretty big wuss as a kid. I loved doin' the dance though.

That is friggin' awesome, man. Your drawing probably looks better than the makeup in the original video. :)

I could SO see this as part of a retro-styled Saturday morning cartoon ....

Agree totally with the comment above! If not a Saturday morning cartoon, then a cameo appearance on one of Cartoon Netowrk's shows, like Foster's Home for Imaginary Friends! This would also make a Seriously awesome mascot costume!!

I remember being really freaked out by his Zombie make-up, but when he turned into a werewolf I became pensive. I thought it was too cat-like... not wolf enough. I suppose there's something about rotting flesh... Shiver! Of course if a friend of mine said, "I'm not like other guys" changed into a werewolf and tried to eat me alive, I might not be so meditative about how werewolves are supposed to look.

I love his pose Shane. Perfect. I remember watching it as a kid and screaming up the stairs so my older brothers would turn it up louder so I could still hear it. Mean-heads. :) Now I love it though and so do our girls. I don't know what's happened to this next generation or if it's just my kids, but my girls have been watching it and looking it up on youtube for the past 3 Halloweens. My friend in LA bought me the music video to this on DVD and I had a party and made 8 girls in my new ward learn the dance since moving here to Utah. Lots of fun.

When I first saw this in toonclub I though it was a Bryan Beach post! I love the retro style, very hannah-barbara-ish. Gendy Tatakovski would be proud!

I am twenty years old and I'm still scared of Michael Jackson. He's definitely not like other guys, he,he.

This is great, looks like a whole new graphic style for you also. To bad this is not the 80s you could being doing the MJ saturday morning cartoon. The modern MJ show would just be creepy in a another way.

you should animate this guy to moonwalk!

Or just leave him as he is. Coz he is cool! haha

HAHAHAHAHA. Good call. I can totally relate, mostly because he still gives me nightmares.

Unfortunately, I think Michael Jackson is way scarier as his current self than he was in Thriller. Sad for him.

Sad for all little children across the world too, especially the little boys.

Great design, Shane! I think you now need to do a Teen Wolf drawing to accompany this one.

I know I've mentioned this before, but you've gotta wonder at some of the things we did growing up. I still remember my parents actually RENTING "Watcher in the Woods" for us...over and over and over again. What the CRAP??? That show STILL gives me the creeps. I think they probably just liked it because it kept us scared and quiet out of their way for a few minutes. LOL! Love the drawings....FAB as always!

I sometimes feel my heart rate coming up whenever I'm watching it at the start. But after all that's what it's made for. They don't call it "Thriller" for nothing. I'm a huge Michael Jackson fan just like my dad because we have all the dvds and songs of him. He rocks! The greatest singer to ever walk the Earth. But I wouldn't like my boyfriend changing into a werewolf like that if we ever go out in the middle of the night during the full moon!