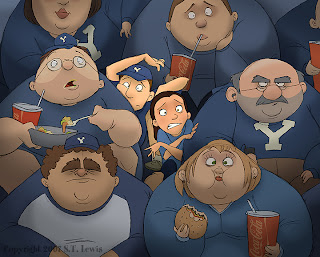 Recently my wife and I went to a football game... it looked like this. I've taken some liberties with hair colors and burger toppings, but this was basically it. I'm not exactly in a position to criticize as I would still be considered overweight if I magically lost 20 pounds (which realistically is the only way I'm going to lose 20 pounds), but I think it's time we abandon the "ticketing" system and start purchasing our stadium seating by the inch. I'd have to pay more than a lot of people, but then I'd at least know that I wasn't going to have to watch the game with someone I don't know sitting on my lap... and my arm... and my other arm and chest. On the bright side, however, it was a good game, and I expect to be walking again in less than a month. Really looking forward to that.
Posted by S.T. Lewis at 8:55 AM

awesome I love the guy sipping he soda...he looks a but confused.

Ha ha, i really want to join in and poke fun as well...however...i do not want to jinx myself in the future...i may look just like that one day. I think it would be bad kharma. It is pretty funny though.

so much I want to say and wont....I can't wait to show my husband tho, haha

Dude, what happened to you? You said you'd be walking again in a month, so I want to know if everything's okay with you.

Just recently, I finally kicked away the crutches I was using for something like nine dogaweful months! It was only a foot fracture, but it took forever to heal and my foot is taking a long time to adjust.

man thats some funny stuff. looks like a my family ruinion!

Everything's fine with me... the leg thing's just a joke. I could walk fine right after the game, even though my legs were pretty flat and bloodless for an hour or so. Thanks for the comments, everyone. It's always good to hear from you.

Cool! Regarding the crowds at the stadium you went to, well, that's how I feel at all the metal shows I've been at!

I'm really fat and I take great offense at your post. I also love the guy about to take a bite but he has to wait for the play to finish. Love this one.

What a nightmare, I feel like I am there looking at this, very funny.

I think you did a great job with the liberties you took on the burger toppings, it looks so much better then I imagine it was in real life.

Omg, this pic is so great.

Awesome... I have been to that game too, only the school colors were different. Really well done!

Wow - what stunning drawing skills and clever use of lighting! No wonder you are in the job you have!

You are really quite brilliant - this is masterful character work - I absolutely love it!! It is so darn funny!! Kudos!!

great illustration. now i can't wait for you and your wife to take an airplane trip somewhere.

Hi, I am one of Brynn's friends and linked into you blog. First, I love your art, it is great. When I saw this picture I had to show my husband since he is a huge BYU fan. He was wondering if he could post it on Cougar Board (this is where he gets all of his news). He is sure that everyone would find it as hilarious as he did. If its a problem, that is fine too. You can email him at bradfasa@excite.com. Thanks.
Lindsay Foster

My GOSH...I have missed a LOT of entries. It has been crazy lately. I HAVE to show this to Chas..he'll wet his pants. He's at the BYU game as we speak. Craziness..it's supposed to SNOW on them. He's actually been there since 1...2 1/2 hours before the game. He claims that's what "REAL FANS" do. Whatever. LOL! This is hilarious!!!! So funny!! I've missed keepin' up with your blog while I'm been running around with my head cut off lately!

I probably went to the same game. Fortunately, I was sitting where the cheap student tickets got me. There was plenty of room. But that could because everyone sitting there were poor college kids who were on the brink of starvation...