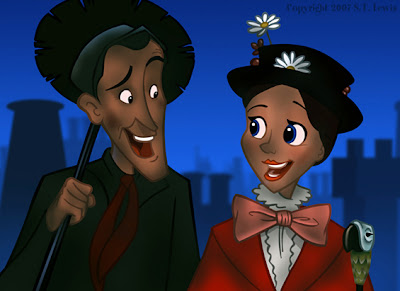 I love Mary Poppins! But as wonderful as that movie is, I'm actually talking about Mary herself... the fictional nanny. I love her. My wife knows I feel this way, and she's okay with it... probably because, even if Mary Poppins was real, she would now be in her early 70's. When I was a kid, she seemed old and disagreeable, but then I grew up and was pleased to learn that Mary Poppins is actually quite hot. It's a jolly holiday with Mary... no wonder that it's Mary that I love.

Mary Poppins is seriously my favorite movie ever, and not just because I have a disturbing, 40-year outdated crush on Julie Andrews. Dick Van Dyke and David Tomlinson should have won Oscars for it like Julie Andrews and the Sherman Brothers did. While we're at it... let's give a Lifetime Achievement Award to the penguin waiters. Eminem has an Oscar... then why not the penguins?
Posted by S.T. Lewis at 8:45 AM

She is pretty hot, but doesn't she seem a bit bi-polar in the film. I mean she is so opposed to everything the kids and Bert want to do only to then join in the fun. Then once they are having fun she goes back to being stoggy, stiff and proper again. I can't figure her out.

Plus she always have to be better then everyone else. She has to win the horse race, she has to spin more and better then any of the Chimney Sweeps and although she floats to the ceiling and serves tea she still thinks she is above the humor that everyone else is enjoying.

If Otters are jerks then I would have to say Mary is a jerk as well. Pick an emotion and go with it, stop flopping back and forth on things.

If she wasn't hot do you think anyone would have put up with all that mind changing she puts people through? Certainly not. The penguins should have kicked her trash.

Mary Poppins! Practically perfect in every way. I, too, have a crush on this vixen. I'm not surprized, really, since our birthdays are so close together.
Kelly's comment summed up the women in my life when I was single. Although I'm sure Miss Poppins was not fickle like that at all, hot goes a long way when it comes to tollerance levels. Cream of the crop, tip of the top, it's Mary Poppins and there we stop.

Mary Poppins might well be my favorite movie too. Practically perfect in every way.

Kloosli - I think her emotion flip-flopping is due more to her being the quintessential English nanny than anything else. My impression was always that she was attempting to show how to have fun and cut loose whilst still retaining that stiff upper lip at the appropriate times. That said, she does come off rather cold in spots.

awwww man - while I was looking up how to spell "quintessential" Seth totally got the "practically perfect in every way" line in first! Curses! :)

Julie Andrews was totally hot. And who cares if she was a downer sometimes... she could freakin' jump into a chalk drawing.

Your picture of her is very cute. The soot effect is nice.

this was a hilarious read and the funny thing is the responses that have come out.

Back in 1980, when I was seven years old, I saw Marry Poppins on the big screen when they re-released it in theaters. I totally fell in love with Marry Poppins then, though I never would have admitted it. It was a forbidden love because every seven-year-old boy nows that Marry Poppins is a stupid girl movie. Ah well, I still have a bit of a crush on Marry Poppins... just don't tell my wife.

And notice that you're all married. Do I see a connection here?

Ah, Mary Poppins!!!!! Kudos to you for broadcasting your crush. It takes a big man to do that. She was kinda hot wasn't she? I gotta say your croc and otters pic is awesome too. I've been watching planet earth lately and its insane. Did you see the one with the elephants and lions at the waterholes? Crazy stuff. As always your stuff is brilliant. Take care,

Wow man..this blog never ceases to amaze! I don't visit for a while, i come back and you're talking about your crush on Julie Andrews and your hatred of jerk otters. Makes sense. Man awesome art work all around though, and funny as ever! I'll be back...but I'm scared what I'll read next.

I completely agree! Mary Poppins was a fantastic Flick. But I had a crush on Dick Van Dyke. Hey, I've tagged you to write 8 random things about yourself!

Mary Poppins is one of our fave Disney's as well...including my husband. Hmm.....I wonder if my hubby likes it for the same reasons you all do. :-)

Those designs are spot on to the actual characters, great job.

These are great Shane - you've caught the likenesses!

Mary Poppins is the best! Not just my favorite Disney movie, but favorite movie, period. When I was a kid, I had a parasol and I would boss my little brothers around saying things "Spit spot", as I tried to sing the songs like her. I stopped when I saw the neighbor lady laughing at me.

This picture is awesome. And I totally agree about the penguins.

I agree with Kelly. Mary Poppins is a jerk. "When Mary holds your hand, you feel so grand. Your heart starts beating like a big brass band." Heart murmurs are serious business, Mary. Stop toying with people's health. And you owe the carnival for carousel repairs!

Great drawing of this maniacal genius, Shane. And agreed... Penguins who aren't Happy Feet should get Oscars.

Oh God yes, Julie Andrews was hawt.
I wonder/doubt if your Julie Andrews crush extends to The Sound of Music, but could you perhaps do one of the will o' wisp Maria? Pretty please?

Great work! This is wonderful. I too have a crush on Mary and love the film. Please do more Mary Poppins drawings!

Hi, i was looking for some Mary Poppins's picture to link in my new post about Mary Poppins and I found your blog.Congratulations, it's very nice. I'm in Rome (Italy) and I'm a big fan of Mary Poppins, and my girlfriend is pratically in Love with Mary (She knows the whole script).I agree with the anonymous, please do more Mary drawings, you're great.