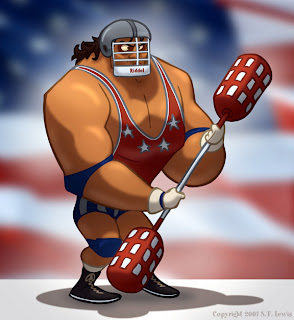 Recently I was thrilled to learn that ESPN Classic airs reruns of American Gladiators every night at 11 o'clock. For me this has meant less sleep, but it has also meant a great deal more laughing about blunt force trauma caused to mullet-wearing heads. Nitro, Gemini, Thunder, and the gang... oh, the flashbacks.

My ninth-grade Geometry teacher took a month off of work (probably for a medical procedure of some kind), and he told us he wouldn't be around because he was trying out for American Gladiators. Some of the students believed him, but I knew the show well enough to know that "Out-Weigh All of the Gladiators Combined" wasn't one of their events. Too bad, though... he would have smoked them in that.

Is American Gladiators the best TV show ever? Probably not. But is it the best show ever about over-grown beast-people using padded clubs and tennis ball guns to beat the crap out of bus drivers and grocery store clerks? I dare to assume that it's at least in the top four or five. Seriously - what's not to like? It's a recipe for magic! Thank heavens for reruns.
Posted by S.T. Lewis at 1:40 PM

Wow..talk about a blast from the past. I used to watch that show all of the time, it was good back then and probably enjoyable now. We use to pick who we were and see how we fared through out the show.

I caught one of those reruns the other day - I LOVED this show when I was young. Like all well-fed young men who spent the better part of their day behind a pencil I wanted a chance at the sharpshooting test, dodging and firing the tennis balls. Mostly this was due to the fact I knew I could catch my breath hiding behind those cheap cardboard walls :)

I watched the show religiously as a kid, and unlike all the other shows I watched like that, American Gladiators has become even MORE entertaining. Great post Shane, and nice drawing.

Ahhh yes, American Gladiators, a show that truly captured the very essence of all American values of freedom, prosperity, and beating up bus drivers and VONS clerks. But we mustn’t overlook the valuable skills these men and women are demonstrating! Take, for instance, the talent for running up mall escalators, pedaling a bike with your hands, and how to defend yourself in the event you are ambushed with nothing but a giant Q-tip at your disposal. Truly essential qualities for any self respecting American.

Oh my crud...I had forgotten about American Gladiators. I LOVE IT! My fave challenge was the one where they both had to get in ball cages and run around and try to balance on the little stands on the ground that would suddenly burst with steam if you landed on the right. LOL! So funny...definitely a fun blast from the past...and your Gladiator is a classic!

Do you know that they're making a new American Gladiators show?
It's true. On NBC I think.
Heck... I'll watch it. FO Shizzo.

I'm actually working on a web game for AG right now. Saw this on a google search! cheers man!