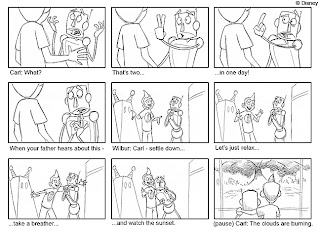 Today Disney released their 46th animated feature: Meet the Robinsons. Wait... this is going to sound way cooler: Today we released our 46th animated feature! Sweet. Okay, so I didn't have anything to do with the movie, but I did work on the video game. Here are a few of the storyboards I did for one of the game's cinematics. I tried to find a sequence that wouldn't give away anything about the movie or the game... just wanted to advertise them both a little here on my blog. If you haven't seen the movie yet, what are you waiting for? It's pretty nice, and the Bowler Hat Guy's great. So go support animation, Disney, and ME by seeing the one and playing the other.

Don't expect to see the characters I've drawn in either of them, though... storyboard artists don't draw on model... or at least I don't.
Posted by S.T. Lewis at 10:45 PM

Love your storyboards! This definitely looks like a great one and sounds like the 3D aspect will be fun as well. Kaden is begging me to take him....so I'm sure we'll get out to see it soon!!! Thanks for twisting my arm even more with this post!

Yep I want to see this now! Great work Shane!

waaaaaay cool to see your boards! Always been enamored with people who can board stories! A nother wonderful skill you have sir! Amazing sir!

Shane, thanks for posting this. I got tingles seeing your style on Disney boards, especially with that gag at the end, and the amazing acting.

I am so freaking proud of you!

The movie was REALLY good too. It's not the best film ever made, but I was really pleasantly surprised. It was SO funny too. Shane's right, the Bowler Hat Guy is the best.

Congratulations, Shane! It looks like a cool project to have worked on. I'm going to go see the film as soon as I'm done with taxes. It'll be my reward for all the pain and suffering. Good work, man!

hey thanks for sharing your storyboard work with us! Oh, and that video below was awsome. You should do another.

I've done some storyboards, although, they need to be a lot cleaner....like yours!

These look awesome! ALL of your storyboards and art looks AWESOME. You're such a good storyboarder, believe me, I have to sift through your old Feature Films boards all the time, and I'm always so impressed. My boarding skills are seriously just terrible. I've done such a crummy job filling your shoes over here, in fact, it's impossible to fill your shoes, at least for me. I think Adrian got so tired of me giving him such crappy boards, that he decided it was much easier to do it himself. It's true, I suck, thankfully, he's given me some other assignments that don't include storyboards or thinking. He's such a great boarder too, hopefully something will work out over there. I told Nathan to get me a job there, but if they just need boarders, I'm affraid my future is rather dim. Man, I'm blabbing, these are great and so was this movie. The frogs were my favorite part!

Storyboard artists generally don't worry about drawing on model because drawing quickly is more important than drawing characters accurately. The most important thing is getting the ideas on paper. If you can tell who the characters are, where they are, how they're feeling, and what they're doing, it doesn't really matter if they look exactly like the final design or not.

Usually disney stuff is stupid at all... just look hanna montana... a real shame and make girls become stupid in a very early age, i wonder why the world is like this, nothing that disney makes is worth it anymore.