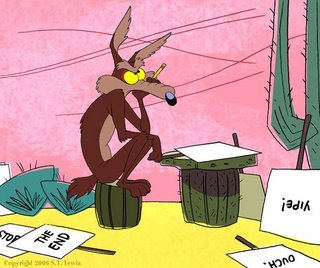 I'd probably think twice before getting involved in an activity that might require me to have a "Yipe" or an "Ouch" sign on hand.

I was watching old Looney Tunes cartoons with someone a while ago, and he wondered where the Coyote kept getting all those signs from. An invisible backpack? I don't know. That never really bothered me. Obviously wherever he gets them, he's buying in bulk. What bothered me was that he had planned to fail when he wrote on his signs. Maybe he had one that said, "I finally killed him!" but never got to use it. If you carry around a "Yipe" sign, you're asking to fall off a cliff.

Toon Club's topic for this week was Looney Tunes - a very hard topic to draw something for. There's no competing with Chuck Jones. I don't love the way the Coyote turned out... probably should have done a second sketch. The background was fun, though. I like not coloring inside the lines. I don't know why I put my copyright on there... I obviously don't own this character. Just a habit.
Posted by S.T. Lewis at 8:45 AM

heheh I should carry around signs..would be loads easier for me to emote.

I think Im gonna carry one that says "Shane RULZ" in hopes of meeting you one day...

haha.. wow this one's really nice!
i never for a second thought it wasnt an original image...you got the style down pretty well! haha, and its so funny to see him, sitting there, thinking of what to write on those signs!!
its so great!!

Don't be so hard on yourself. That would be cool if we had one day every year where people had to carry around signs to talk. Nothing else could be said. What if...

Personally, I carry around a sign that says, "Look out below!" just in case I can't get the words out. You never know when you're going to be racing around on your rocket skates (in a Genuine Bat-Guy outfit) and end up going off a cliff or high-rise by accident. Y'know, no matter how hard you flap those wings they just don't keep you airborn. I'll never make that mistake again.

Hehehe, nice cartoon idea, Shane. Wile Coyote was my hero as a kid, so much so that he still inspires me to this day. If you're interested, call by the site and follow the link to Seed Animation from my link bar. There are some shorts we did for Nickelodeon on there that were a homage to Wile - CURIOUS COW.

hehe funny stuff :D and I think u got the coyote down perfect!

man, this is awesome. I still can't believe how high quality those cartoons were. you did it justice!

True, Chuck Jones was the master but you've nailed that style man. Even the bg and props are dead on. Now there's an odd saying,"dead on". I don't quite get it. Dead center. So close to the center you're dead. Doesn't seem like much of an incentive really now does it? That's what I want for Christmas. A book explaining the origin of random phrases. Excellent.

If Disney doesnt't work out for you, you now have WB to fall back on. The likeness blows my mind.