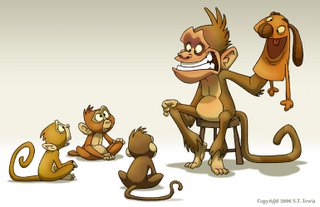 Monkeys can't do puppet shows... that's a good title for a song. Maybe a country song... or reggae. You see, monkeys lack the opposable thumbs required to operate a puppet's mouth. Beyond that, monkeys can't speak, making puppetry quite impossible for monkeys on at least two levels. A ventriloquist monkey would be even more confusing, because now no one's mouth is moving. This could all be the song, but it would need to rhyme or at least have a memorable chorus.

Opposable thumbs are the only difference between monkeys and about 90% of the people I encounter on my way to work. If a monkey had opposable thumbs, it would be Ben Affleck. Well that was an unfair attack... totally unprovoked. I should probably apologize. Sorry, monkeys.
Posted by S.T. Lewis at 11:50 AM

Of all the artist blogs I have seen, yours is the most entertaining. This post is freakin' hillarious. And your characters always have the best facial expressions.

hahahahahaahhahhahaahahhahaah shane, you are a man of such eloquent words. Have you done a book? And if so where can I get it. Such and awesome mix of words and visuals. If you ever start teachin let me know cause Id definately take that class.

It's too bad really, because having four hands and a tail would allow a monkey to put on a pretty good show. Although the tail wouldn't make a very interesting puppet. Maybe it could act as a hot dog or a ghost.

Man, I love this piece. I really like the young monkeys expression who's facing us. Great subtle touch! Those drawing below are also wicked! Actually, I can't comment on just one. They're all super strong. The pigs are my fave!

This one is great, Shane. The expressions on each of the characters reactions to each other is very well done, nice!

hahah!!! great illustration!..and awesome story to go along with it!

you're so cool. so entertaining! i love you.

I love you too, Shane, but in a totally masculine manner, and not at all sexual.

I like the shapes of the tails. Those are the very shapes I used to doodle in math class.

hahaha, your blog never fails to make me laugh :D

Awsome drawing, that puppet is so cool!

and i would definetly go for a reggae song

I wish I could watch the monkey's puppet show...while hearing the monkey song. You better post the song when you get around to writing it!

Now I might be wrong but I thought mokeys DID have opposible thumbs. I took your painting and blew it up on photoshop and discovered that I am right. The main ventriloquist monkey does have a thumb which is opposable.
nice drawing

Crap! Well, what I meant was that they don't have opposable thumbs on their LEFT hands, and puppets always go on the left hand, which I assumed everyone already knew. Chimps have opposable thumbs... they actually have them on their feet too. But monkeys don't. Mine does on one hand because he's evolved a little. So has the orange monkey. Idea: decent. Execution: Shane-ish. Crap. Don't blow up the paintings in Photoshop, Dave! They're small for a reason!

OMG. SO cute! :D Oooh, I just wanna pick the all up and hug them. Haha. you're making me feel all motherly. :)