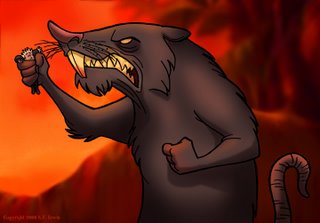 Themes have collided! This week's Toon Club topic was The Princess Bride, and I assume you're already aware of my recent obsession with rodents... or at least with things that can be classified as rodents because they don't resemble anything else. It was an easy call to go with the R.O.U.S. for this week's Toon Club piece, but then I got a little crazy and took the thing from "unusual size" to "ridiculous."

If I had a fast food restaurant, my drinks and fries would come in the following sizes: Petitishly Girly, Medium, Unusual, and Ridiculous. Sorry - we don't have "Large." I hate how every fast food place has its own confusing system for food sizes. When I ask for large fries at Wendy's, that means I want your largest container of fries. Oh, I was supposed to call them "Biggie." Yeah - saying that word doesn't make me feel stupid.

That reminds me of a story... in high school I worked at a college concession stand. That's where I found out that nacho cheese is made by adding water to yellow powder. Delicious. So anyway, the worst part of my job was when people ordered the Meal Deal or the Snack Pack, because those were the menu items that included fries, and the guy making the fries couldn't keep up, so if anyone ordred the Meal Deal or Snack Pack, your line would get backed up.

I came up with a solution. By simply adding a few Y's to the menu, I made it so no one wanted to order those items anymore. I proved that college students would refuse to order a "Mealy Dealy" or a "Snacky Packy," no matter how much they wanted fries. Such a thing would make them feel ridiculous... which is the size of this rodent. I'm glad I was able to wrap this story up on the original topic. Essay complete.
Posted by S.T. Lewis at 11:05 AM

That's awesome! I've always been afraid of running into an R.O.U.S. one day, now I'll have to watch out for R.O.R.S.'s too! I love the drawing.
That's a hilarious story. I'll be laughing about it all day!

It's a shame guys like you don't go into fast food. At least, it's a shame for the fast food industry, but good for Avalanche. I would much rather order an "unusual" sized drink than a "large." It's a great drawing as usual Shane, and a great use of color. I especially like the strait line that leads from his elbow to his pinky, and the curve on the other side of his arm that compliments the strait. The nose is quite nice, too.

Haha, certainly no problems linking me up. Thanks alot man. I really like your character design! I will link you up as well... as long as there's no problem ;)

Man, you crack me up. I went to some of your old archives and found that bit about the bear and kids. When I hit that part about donuts dreaming about playing with you I almost fell off my chair. I hope one day you have the chance to write for animation. Together with your art you can paint a pretty funny picture. I linked you by the way. Take care, Andrew

Get me my Big Fig.By the way the whole Big Fig thing is all your fault. It's like cocaine and you were the pusher handing out free samples, except they weren't free, they were at least $125 a pop, and once I bit, I bit hard, to the tune of over $1,000.

shane, that was helarious. you're a genius. and just to prove you wrong, if a rapper can change his name from Puff Daddy to P. Diddy, then Snacky Packy can work. I don't understand this world...

This is the Barry Bonds of rodents. Is he eating 'roids?

And may I have a Biggy Wiggy Mealy Dealy-poo, please.

Ahhhh. I remember that part in the movie and then Wesley rolls him onto fire and then the guy with lots of fingers catches them. Only I don't like that part of getting catched, only the part when the big rat is on fire. My friend Connor got two rats named Nymh and Lily. They had to bring Nymh back to the store because he bit too much and then last week after Connor's birthday party Lily died. He cried a lot. Me too. Hey guess what Shane? I'm going to school in 2 weeks and I'm going to be in First grade now!

I like this because Rats of NIMH used to scare the bejesus outta me when I was a kid. This is that magnified tenfold. Thanks for the new nightmare. Isn't art wonderful?