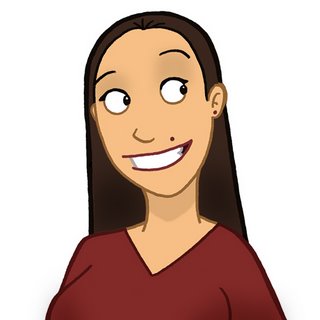 This is my pretty wife. We've been married for 943 days... I haven't actually been counting. I've been doing the math to come up with that figure since day 939. That's enough math for a while... glad it's done. On day 946 we're going to Disney World. That is lovely... with "that" referring to both my wife and our upcoming vacation. I probably shouldn't call my wife "that." I'm digging a hole here... better start a new paragraph and forget this one ever happened.

The rest of you can come to this site when you're in the mood for an angry rant or a dumb story or more information on bears eating kids. My wife hears it every day, and then goes to sleep knowing she'll hear more of it tomorrow. What a nightmare! Putting up with me will get her into heaven, though, so she can't really complain. I love my wife. That's all I have to say for now.
Posted by S.T. Lewis at 11:06 AM

What a great caricature. You're much better at it than I am. Last time I tried to draw a cartoon of my wife, I had to sleep on the couch like some sort of samurai.

I love the expression. The last time I saw her I think she was wearing glasses(?) But the likeness is very well done!

You have gone where many-a-artist has feared to tread. A caricature of your wife is definately dangerous territory, but you've fared well my friend. The only opinion that really counts though is your wife's! ...and Disney World's... I hope you have a blast down there. No hurricanes this time? Oh well. That means longer lines. Think of me fondly if you go on Kilimanjaro Safaris, and tease the animals -they like that.

I actually asked him to draw it of me. I had to put together a "how to me Lindy" manual to leave with the girls I work with - so while I'm at DisneyWorld they don't fall to pieces. So I wanted a picture of me on the front. I love it.

I always think of you at the Kilimanjaro Safari, Seth... especially when the guy with the gun catches the poachers. Too bad I never got to see you in that role. True, I didn't know you at the time, but I'm sure your captivating performance would have made me a fan of yours before I even saw your artwork. I'm still hoping for a hurricane.

Normally when people ask me to draw them I immediately refuse. You always get, "My nose isn't that big?" or, "I really look like that to you?" It was quite a position to find myself in, but it looks like I did all right on this one... my last caricature EVER.

Shane can you do a caricature of me? I have a big nose, so I won't get offended and sue you for an amount equal to a trip to Disneyworld.

Nevermind, since I can't come, can you bring me back a trinket? Like Tinkerbell, or a Waterbuffalo?