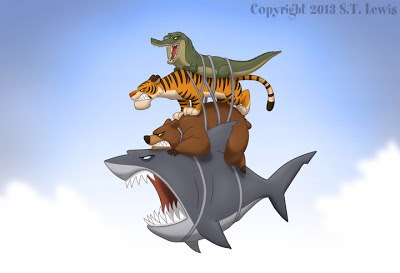 You may have noticed that my blog has been fairly dormant for quite some time.  Perhaps you assumed that I had given up on blogging or that some grudge-holding killer whale had murdered me in my sleep, but no… I’m still here.  I’ve actually been working on something that ended up taking a lot more time than you’d think it would:  evolution.

It all began with a simple question:  What would happen if a bear was bred with a shark?  Great white bear?  Grizzly shark?  In a perfect world, one of those would certainly be the result, but trying to get a bear and a shark to breed posed a set of problems I wasn’t prepared to deal with and led to the deaths of at least seven unpaid, entry-level interns.

I recently came to the life-altering realization that breeding two animals together causes you to effectively forfeit half of each animal.  How do you know which elements of which animal your final product will exhibit?  I could end up with a grizzly shark that only has a single row of flesh-tearing teeth or a great white bear without its signature, flesh-tearing claws?  Why lose elements of each animal when you could just tape the two of them together and keep all parts of both?  It's simple, common sense!  And as long as we’re taping animals together, why stop at just a bear and a shark?

This new, advanced creature I’m developing is not completely free of problems.  For instance, how does it get around?  Does it swim?  Does it fly?  If it’s going to fly, I’m going to need to tape a penguin to it… and also tape the penguin to some kind of flying bird.  This creature is going to happen, though, and when it does, you’ll remember that you heard about it here first!  And YOU can be a part of it!  I’m currently hiring interns… no experience or expectations of payment necessary.
Posted by S.T. Lewis at 11:29 AM

You are HILARIOUS! I enjoyed reading the story as much as I enjoyed looking at the art. By the way, you are one of my favorite artists to look at for cartoon animal style. Very nice work. I love the eyes, the style, the shapes, the colors, the shading, the gestures. Very nice.

Very cool illustration. I can't help but wonder if you're also eluding to something metaphorical here. Good luck on the Dr. Moreau animal splicing, I'm curious to see what you end up with.

Based on the picture, I'd say they move about by levitation or cannon. Would it diminish their fearful appearance if they wore human-bullet-style helmets?

Good stuff. I love your animals. I would love to see your Monster post too. :)

Awesomest awesomeness!! I'd buy a print of this one!!