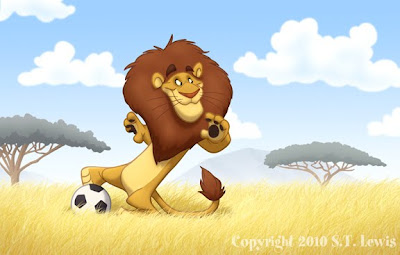 With roughly four billion fans, soccer is unquestionably the world's most popular sport, which is great if you're soccer but really disappointing if you're the world. I don't like soccer... probably because I like not being bored out of my mind. I decided to give soccer another try last week, and I seriously made it 31 seconds into the game before I had to start skipping ahead. After a couple of hours that I could have spent napping, the game ended in a tie... a stupid, unsatisfying tie! No sport, field event, race, or board game should ever end in a tie. (Are you hearing this, NFL?!) So with its upward-counting clock and low-scoring lameness, soccer will just have to go on without me... unless they find a way to score 20 to 30 goals a game... then I'm back on board.
Posted by S.T. Lewis at 9:05 PM

Haha same here mate, watching soccer bores me Playing it on the other hand is awesome fun. In other news - great pic and fun character!

HERE HERE! The only good sport is hockey: where people bash each other's heads in WHILE ON ICE! Hehehe

The rugby world cup is next year. I guarantee it's much more interesting.

Love the drawing! Reminds me of a German physicist who toyed with me when I was getting started in soccer.

But now to a more serious issue. Having my favorite game sullied on the internet like this for all the world to see, I feel obliged to say a few words on its behalf… :)

I used to feel the same way about soccer until I played it. Unlike football or baseball one doesn't spend most of the time on the field standing around waiting for the next play or half the game on the sidelines waiting to play offense/defense. Having played football, I found soccer free and exhilarating in comparison - continual motion, playing angles and spaces, setting up plays and ambushes, placing the ball, and getting in the best shape of my life (after soccer everything else was easy). Watching a good game brings backs fond memories and gives me some of the same feelings. However, nothing is more tedious than a soccer game when players don’t have their hearts in it. Well except for baseball, golf, tennis, and, from what I’ve heard, maybe cricket? (My hat’s off to anyone who can sit through an entire baseball game, golf tournament, or tennis match without picking up a book or newspaper, bagging some Z’s, or wandering off to do something else.)

Tie's? Well, winning by a goal or so in hockey, basketball, football, soccer, etc. doesn't generally prove much of anything. While it counts as a win statistically and may give bragging rights, of sorts, its not very satisfying unless it was a well-fought game on both sides. (But then, I think a well fought tie also feels better than thrashing an opponent without much effort -- unless it keeps one out of the next round of play.) Seriously, its up to the better team to prove it and if they can’t, they deserve a tie…

As far as low-scoring goes, I think its more quality of the plays and saves that one has to look at in soccer. In a game between two good teams there is a lot to watch if you know what you’re looking at. In any event, keep in mind that football manages to cover up low scoring by handing out a gratuitous number of points for merely running the ball across a very wide goal line or kicking a ball through large goal posts relatively uncontested. [I find basketball, where lots of points are scored, generally monotonous: basket is too low, playing area is too small, and there are far too many free throws. The floors are too squeaky, too! :) ]

I actually found the upward counting clock interesting, especially when it stops after the official time period ends and goes into stoppage time. Its a bit like playing sudden death at the end of each half since only the referee knows when the half really ends. Let’s see the NFL do that!

My 2-cents on the matter.

I love the vaguely Africa-shaped mane.

Steve is right. When you know what you're watching, there isn't a boring moment in soccer. Players are constantly moving on and off the ball. When you can recognize the perfect pass, the perfect run, the perfect defense, etc., you realized that there's always something exciting happening in soccer. Love the sport. Love to play. Love to watch. GO U.S.A.!

I don't have an opinion about Hockey, or at least I won't share it here. You'll thank me later.

So, by your reasoning, Tyler, it's exciting because the players are moving constantly? You must really enjoy seeing dust waft through a beam of sunlight.
-Jake

Oh, that does it. You are dead to me. Long live Soccer!