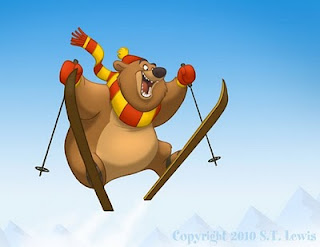 As a fan of watching cold people fall down, I've really enjoyed this year's Winter Olympics. I came to a shocking realization last night, though... I've never participated in or even attempted a single winter sport in my life. I've lived in Utah for most of my life, a state that uses my car's license plate to advertise itself as the home of "the greatest snow on earth," yet I've never been skiing or snowboarding even once, and the closest I've come to ice skating was when I slipped on an icy patch coming out of Arby's several years ago. The fact that unexpectedly slipping on ice and nearly cracking my tailbone reminds me of a winter sport is a clear indication that winter sports are far too dangerous. In fact, until the Winter Olympics expand their list of sporting events to include driveway shoveling, snowman building, downhill sledding, figure slipping, freestyle parking-lot-donut-making, or using an old broom to brush snow off of a satellite dish (which is kind of like curling)... well, I don't want to completely count it out, but it's possible that I will never become a Winter Olympian.
Posted by S.T. Lewis at 3:40 PM

I laughed out loud at the broom brushing off snow on the satellite is a little like curling. Funny.

haha awesome bear, I think 99.99999% of people will never try a luge in their lifetime. I wanted to go curling when I visited vancouver a few years ago but it was closed for the summer.

You've always drawn great bears, but you amped up the appeal even more. Great stuff, Shane!

awesome picture, but he's got to tuck and lean more if he wants to be in medal contention.

This is clearly the best bear you've ever drawn. Such an expression of joy, and surely he's about to crash into the bleachers, killing tens of spectators.

Don't feel bad about your lack of sports participation... I just found out I've been calling basketball "quidditch".

I agree with the rest on that expression. Brilliant! When I ski my face is far from it. More like a poised tiger. Like a bipedal, clothed, hairless tiger.... without the fangs and stripes either. Actually it would have been better just to say that I don't smile.
All the same, you have to go skiing. It is so much fun.

hahaha yes. I love this

yay! you did a Olympic drawing! you are soo talented. I really enjoy your blog. Keep up the good work.

Classic post Mr. Lewis! It reminds me of the time I was walking down the sidewalk through six inches of fresh snow when the really hot chick right in front of me slipped and would have fallen flat on her back had I not been there to catch her. Too bad I was already married...or maybe thank goodness! She may have been crazy for all I know!
Anyway, I really hope they make driveway-shoveling an olympic event; I would be a medal contender for sure!

Hi, Shane...
Can I ask a BIG favor from you? A couple of years ago you did a drawing of a "Mountain Lion" which was uber-funny! Could you do a sequal to that drawing and do a "Mountain Gorilla"? I really LOVE apes!
-Chris S.

I figure it one of two ways, either A) he's having the time of his life, or B) he's just realized that the kid from Slytherin House can't get out of the way in time, and is about to pounded bodily into a snowbank. I'm okay with either.
All this time I thought Hogwarts was in England.

You get better with time Shane.

ok i love this pic and like know u need a bird band and that will be funny.