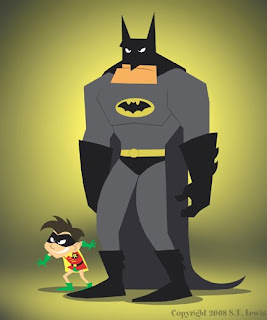 As you may already know, The Dark Knight now has more money than the United States. That's partially because the caped crusader has robbed U.S. citizens of over 525 million dollars in the last three months. I guess that's okay, though, because he seems nice. I think one of the main reasons that movie's been so successful is due to its complete lack of Robin.

Was Robin left out because Batman's strength is diminished by the mere presence of a sidekick? Was Robin snubbed because a "dark knight" can't sneak up on criminals in dark alleys when his companion's wearing a Bolivian flag? Those are possible reasons, but I believe Robin was only slighted for being more annoying than he is useless? But whatever the case may be... holy thanks for leaving Robin out of your movies, Batman.
Posted by S.T. Lewis at 10:00 PM

Chas and I just laughed ourselves to tears at this one!!!!! Oh my gosh!!!!! SHANE....PUBLISH YOUR BLOG ENTRIES INTO A BOOK!!!! THE WORLD HAS GOT TO READ THESE!! It is so refreshing to read such phenomenal writing and intelligent humor!!! My gosh...if you don't get published, you are robbing the world of millions of "laugh til' you wet your pants" moments...and that is a tragedy! LOL! ;-)

Maybe Robin got his outfit design from one of the "reality" model/design shows. My 3-year-old could design something more wearable and better looking and he cries much less than the "reality" contestants.

Maybe Robin should try using the Ethiopian flag for a style improvement.

Thanks for returning to the blogging world. We have missed your great humor and antics.

I agreeee. Make your blog into a book. It is hillarious.

My son and I have been playing Batman Lego on Xbox and I gotta say... all Robin really does is just get in the way. It's great 'cause the game totally makes fun of how lame he is. Poor Robin.

Agreed. Robin is lame. But I like Burt Ward in the old series!

Wasn't Bolivia created after the original batman series as a spin-off inspired by Robin's outfit?

I agree with the book comment. These posts should really be published. LOL

That is pretty awesome!

LOL! I don't think Robin came into the picture until the George Clooney one...but I could be wrong. That's a lot of moola!

Nathan Lindsay..still laughing out loud at your comment (hahaha!!!)

I think I'd want a sidekick if I were a superhero, after all who's going to save my can when I'm unable to think of the answer to the Riddler's riddle while I'm strapped to a giant penguin missile which is aimed at downtown Gotham?

Though I'd want a sidekick with a cooler name than 'Robin'. Something like 'Kick-Butt Boy', 'Lights-Out Lad', or 'Stripling Warrior' would be cooler.

I think Batman keeps him around so he has someone to send into the fray first... kinda get the thugs distracted (laughing at his super short shorts and all)... then BAM! Batman takes them out, unawares. (Very few people know that, before the fall of the Flying Graysons, this was Alfred's job)

I completely agree. Personally I think that the element of a partner creates a greater sense of vulnerability and dependancy for a hero. Batman is supposed to be independant and one tough guy. Adding a sidekick just makes him seem lame and incapable of doing his job. It also gives the bad guys someone to use as a hostage.

Great post Shane. Great drawing too. I completely agree about Robin. Still Robin was more tolerable than Alicia Silverstone as Bat Girl. ug. Have you seen that youtube video of Bam man and Piderman? Here's the link.. http://www.youtube.com/watch?v=u1YJbCftjBI