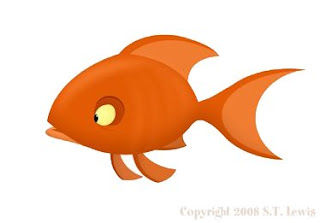 We went to our nephew's birthday party recently, and instead of taking home a party hat or some leftover cake, we were sent home with a goldfish. I'm not sure we really needed a pet, but as long as we were getting one as a party favor, I'm glad we got the easiest, most boring, least rewarding kind of pet. My wife and I had a conversation about our new fish that night:

For the next day or two, she tried calling the fish by other names, but I held fast to "Steven Tyler," and eventually the name stuck. She tried to justify it by saying that Steven Tyler (the person) has lips that are kind of like a fish's lips, but that's over thinking it. Everything doesn't always need to make sense. I know I don't.
Posted by S.T. Lewis at 2:15 PM

I love it! Your stuff rocks just like the loud lipped wonder you speak of.

I think the name of your blog should be, "My Life, My Drawings & My Angry Pants"

BTW I just finished my semiannual blog update, and I can't wait to get a visitor.

Last party I went to sent me home with a full grown Doberman Pincher. What a headache. We actually named him Mick Jagger.

What a funny idea to give a fish. Not funny- like I think they are weird and should feel embarrassed, but a good funny. We've had a few fish die recently (Spotty-tail and one that died so quick I don't think we named it). Good ol' rainbow tail is with us for the long haul though. It's even had his tank tipped over by a two year old and lay flapping on our floor for a few minutes before any of us knew what was happening and rescue him. It lost part of a fin like Nemo and is still kickin'. Hopefully Steven Tyler will have such a determination for life as our dear Rainbow Tail. If you get sick of him just have a party and invite us over and then give him to us. :)

That poor fish. He gets stuck living with you and your snarky comments and then he gets that name. Steven Tyler existed (most likely) before that fish. So doesn't the fish have lips like Steven Tyler?

Hahaha, I love it :D

Yes, the fish has lips like the human Steven Tyler. Shane just is upset that I figured out why he subconsciously wanted to name our fish such a dumb name (no offense, human Steven Tyler, it's a wonderful name for a human). What's sad is it's technically Gwen's fish (since it was the cousins at the party that got to go home with the fish). It'll take her YEARS to even say her fish's name now...

good thing he's a fish and has a memory span of 4 seconds. He's too concerned trying to figure out where the hell he is all the time let alone care about his name. So why not name him something incredibly awesome? I support Steven Tyler and this drawing of him.

I spit up my coffee. Thanks for another mornin filled with laughs and inspiration

Reading this post is like a descent into madness. I can only imagine how your lovely wife felt being a part of the actual conversation.

I had a fish named Argentina once. He lived in my bathroom for five years.

Ha, freaking awesome! Oh, and so's your last post! Yes, that one was freaking bloody brilliant!

This reminds me of one time in class when the instructor was asking for suggestions on what to name the class fish.

PETER: Ganymede!
LOVELY TEACHER: What does that mean?

It was only later on that I figured out a really good response: Names don't "mean" anything! They're simply very convenient ways to refer to each other, and some of them just happen more interesting than others.

I've noticed that the uglier a pet is, the longer they live. I had a hermit crab for, like, 15 years.

Congratulations on the new addition to the family and also on winning the battle over the name.

hey shane! it's will from your intro to animation class.
i'm diggin the fish design!

check out my blog when you have the chance, man!

Well done for holding out- I tried to name our hamster Liv Tyler, but my wife made me back down.

Great story. I especially liked the response, "Try telling that to Steven Tyler" Congrats on standing your ground :)

You are lucky that your goldfish lived long enough to even get a name. At our house the fish naming ceremony usually ends with some sort of burial or flushing. And then a run to the store for a new fish.