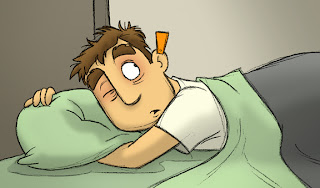 Well... I've been tagged. You'd think I would have noticed it in the mirror the morning after it happened, but no. I first learned of it while reading my sister's blog. What does it mean to be "tagged?" Well, it doesn't mean I've been marked for observation by the forest service like I originally assumed. It's actually something that kind of resembles a chain letter, or a virus, or a plague. If you get tagged, you're supposed to write six interesting things about yourself on your blog, and then pass the assignment on to a handful of your friends. Good news for my friends, though... the tagging stops here. I'm breaking the chain. But even though I'm not paying the plague forward, I thought I'd write six things about myself and hope that at least one of them is mildly interesting.

1 - I've never seen so much as a minute from any episode of the Star Trek franchise... not the original series, The Next Generation, Deep Space Nine, or The College Years. I've also never seen a Star Trek film. I don't have anything against Star Trek, but I don't really have anything for it either.

2 - It bothers me when people tell me to "turn off the TV and pick up a book." I think reading's great... if you're stranded alone on an island or if you hate everyone you know and don't wish to speak to them or enjoy their company. A few years back, I tried to read all of the Harry Potter books. I've never felt so anti-social. The books were fine, but I might as well have been in a coma considering how much human interaction I experienced that summer. Think of someone you know who absolutely loves reading... that's all you know about them, isn't it.

3 - I don't run for fun... because running for fun is impossible. I'll run as hard as I can if I'm playing basketball or crossing a freeway, but running for fun? Hitting myself in the head with a hammer sounds more fun than running. One of my old roommates used to invite me to go running with him. From what? Are there wolves in the apartment? Because if there are, I'll run without question or invitation. But if our apartment is as wolf-free as it appears to be, I'll save my running for sports and moments of extreme cowardice.

4 - I can fly... if you count airplanes and let a pilot help me. I can also fly if you're willing to consider "free falling" a form of flight. But since that would require me to fall from something, I prefer to fly the "airplane" way, thank you.

5 - Nothing makes me more angry than people who talk during movies, bad referees, and drivers who don't understand the "stay right except to pass" part of freeway driving. Actually lots of other things make me that angry. My list of things that don't make me angry would be much shorter... maybe I should go that route.

She's right you know. Glad to know you better Shane. I'm a better man for it. Thanks!

Speaking of weird--you should have written a list of six things that make you weird . . . that would have been very easy.

I'm sorry but, no, if your idea of reading is an attempt to read ALL the Harry Potter books at once then you haven't a clue. Reading is like going to the movies, something you do from time to time without being much interested in conversation while watching the movie.

But I do like your drawings, especially the Stauker Claus last year.

HEY! I got #6 for ya... the Garns family inherent large head legacy! That’s pretty interesting, don’t ya think? Oh wait... did I just cross some line? Well, hopefully #7 is that you’re a very forgiving fellow... heheh... akward. Actually, the way you hold a pencil is very interesting, I’ve tried it and it sucks! Great job on being special!

Tag would've been a lot more painful if we actually used tags. We could use real tags on people who talk during movies. That would be helpful so we would know where not to sit, or better yet, who to deny ticket sales to. I'm starting to sound too much like Anakin Skywalker, so I'll stop.

Gee, and all this time I thought I was the only other person out there who understood "stay right except to pass." :) By the way, that also applies to non-freeway driving when there's a FREAKIN sign telling you so! Phew...

You're nuts.
But in a good way.

In Atlanta to stay right except to pass would mean you were about to die. The freeway I ride on has eight lanes to each side. And we manage to cram it up 4 days out of the work week.

I like the paradox of number six. Very funny. I couldn't read it, though, or it would have crashed my brain.

Teehee, always nice to learn something new about someone.

"In Atlanta to stay right except to pass would mean you were about to die."
Ugh, and someone also had the brilliance to enter from another major highway on the left, when the next most popular exit is on the right...try jumping all 8 lanes in under a mile...no fun.

You list interesting things about yourself and they're mostly complaints. Who are you, Andy Rooney? Here's a few you "forgot".

1. You hold your pencil weird, but in a way that somehow helps you channel Ollie Johnston when you draw.

2. You can never be on Survivor because of your aversion to heat. (I think muggy heat is more accurate, actually.) It's a good thing for the other competitors, as your crafty wiles would surely lock you into at least one of the top two spots.

4. You have Jedi Master level skills when playing the lightning round of "The D Show". Unreal.

5. You are an incredibly loyal and protective friend. I think this is actually your most dominant quality, so I feel bad listing it last.

fantastic stuff in your blog sir!!
i like your illustrations!

Great post Shane! I have a newfound respect for you based on the Star Trek comment alone.

WHAT!! are you kidding me!?! You have never seen Star Trek the college years? It is fantastic, much more intense and mature then Star Trek the wonder years or even Star Trek Saved by the Bell. Definitely check it out some time.

Totally feel your hatred of running. I almost posted it as one of my "interesting" facts. I've been working out with a trainer to get back into shape after having the baby and it's been 4 LONG months on the treadmill.

I love your humor S.T. Pass some of your wit this way I could use it.