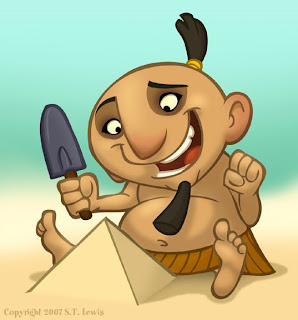 I loved playing in the sand when I was a kid. I'd build roads and tunnels at the beach for my Matchbox cars or re-create Tatooine's Dune Sea from Return of the Jedi in our sandbox. Boba Fett got lost in that sandbox on several occasions, which is bound to happen to anyone who consistently falls into the mouth of the Sarlacc in the Great Pit of Carkoon. Looks like my childhood sandbox adventures were pretty nerdy.

The recent Toon Club topic was Ancient Egypt. I figure ancient Egypt was a boring place for anyone, but especially for a kid. Aside from the short-lived excitement brought on by a passing plague, there was really only one option for something to do... play with sand. Sure, Egypt's a giant sandbox and should be tons of fun, but seriously... how many times can Boba Fett get eaten? (Technically he can only be eaten once every thousand years. That's how long it takes for the Sarlacc's unfortunate captives to be painfully dissolved inside its stomach).

So I would guess that Pharaoh came up with the idea for pyramids in the enormous sandbox of his youth, and years later he had the drive to see his vision through to reality. Mostly he had the slaves to do it, but he also had the drive. Well, okay - it was the slave drivers who had the "drive"... but those were his.
Posted by S.T. Lewis at 9:49 AM

I once made three pyramids and a Sphynx out of sand on a beach when I was younger. It took me all day and I was so pleased with myself. People came and took photos of me as I was building them.

Then about 5 minutes after finishing them, and as I was standing gazing at the fruits of my labour, a family came along and trampled them down so they could lay their sunbeds there!

Slaves aren't funny, nor is Boba Fett (I mean really, he was so cool in the early films and ultimately ruined in the later films), nor is sand. Ever get sand in your eyes. That isn't funny. Egypt isn't funny either... very hostile towards we Americans. I know if you watch the 10 Commandments now it is funny but it wasn't intended to be. And as much as I know about your childhood Shane, there isn't a lot funny there either. This whole post is tragically just plain wrong.

You should get James Earl Jones to narrate your Blog.

LOL! So funny! That baby totally reminds me of the "Egyptian Ernie" episode of Sesame Street. Do you remember that one? Ernie goes to an ancient Egyptian museum thing and there's a mummy/statue that looks just like him, but has that cool Egyptian beard, etc. Ahh...memories. ;-)

Hahahaha Brilliant! Excuted as only you could do it

Your blog is easily one of my favorites. Great illos and hilarious observations.

Hello! Im dropping by to let you know that you are invited to join Monday artday, a place where you have a chance to win an award weekly based upon your own artwork! www.mondayartday.blogspot.com
If you accept email me at darndogdesign@gmail.com
Hope to see your artwork there!