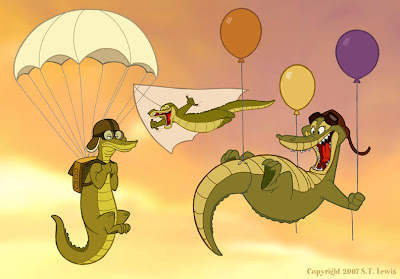 Yesterday I wanted to draw something, but I didn't know what. While I was considering my options, my iPod played "Ventura Highway" by America (the band, not the country). I like that song, but the last verse is quite puzzling:

"Cause the free wind is blowing through your hair,
And the days surround your daylight there.
Seasons crying no despair,
Alligator lizards in the air... in the air."

Alligator lizards? Is that just a normal alligator in the same way that I'm a human person? And if these are just typical alligators, what are they doing in the air... in the air? If Ventura's vast alligator population has evolved to the point that they've mastered flight, I'm not "gonna go"... I know.
Posted by S.T. Lewis at 10:37 AM

ROFL! The expression on the face of the one with the balloons is priceless. Love that. So glad to know that I'm not the only one that is puzzled by certain song lyrics. I think many songwriters MUST be on something when they're composing. My crud...LOVE THIS....so funny.

I was really confused that the whole country of America wrote that song. That would be quite the collaboration. Then you explained it to me, and it's clear to me now.

You're an idiot. I love it.

I laughted out loud when I looked at the balloon gator. He's so impressed with his floating tail! Me too. He's pretty cute stuff.

The one with the parachute looks like he was just pushed out of a plane by his brother that was trying to get even with him and now he's annoyed that he has to think of something to do back to him worse. (Sorry, I watched a funny "Malcolm in the Middle" last night with that theme in it.) Great drawing!

heheheeh magic I tell ya!!! Never dissapointed my friend!

This is fantastic! The alligators are so funny and the sky is really impressive. What programme do you use to colour the images?! Keep up the good work

I use Photoshop for coloring. I tried to use Painter once, and I learned that I don't know how to use Painter. I've learned lots of shortcuts for Photoshop.

Thank you all for coming to my blog and saying stuff... you're the coolest!

This made my friday eve morning a good one.

Love it! This is one of those great drawings that, even though it doesn't make any sense, works just fine without the explanation. Great color choices and fab drawing as always. I do have to say, though, that para-gator has the most thought provoking expression. Why is he so embarassed by the other gators? If you're going to go to the trouble of renting a plane to jump out of, you might as well trying to enjoy the trip down. Lizards are funny that way, I guess.

You know it's the end of the world when lizards and gators fall from the sky. It's been raining cats and dogs for awhile now. Nicely done.

Lol that's hilarious! Awesome characters and nice colors. Haven't seen those guys yet here in Tampa. I guess the Ventura gators are a little more advanced.

I love the expression of the dopey one with the baloons. Awesome.

frickin wicked!!!! i love this one. but then again i love them all. cheerio

Hey Shane... Man I thought I saw everything... when I saw an elephant fly.... but flying Aligator Lizards... well that just made my head explode.... you know... like... like in Scanners... anyways.... You have some great stuff on this blog... and these Aligator Lizards are really helpin' that cause.... 'til next time... Check Ya Later.... PEACE!
J

Great as always. The colors come together especially nicely.

Wow! Wow! Beautiful piece and such natural posing. Lovin' it man. This is fantastic.

The world would be a better place if Alligators could really do this sort of thing. Of course it would'nt be too amusing if one of them swooped down and bit off someones head... Well, then again... Great artwork as usual!

That would be the most terrifying highway ever.

Love the expressions on these 3,especially the one hang gliding !! Great work !

I nearly burst my apendix when I saw the gator with the balloons. Too dang funny Shane! What a riot.

But seriously, I've been wondering what that meant too. I can only guess that they were smokin' LDS when they saw this apperation. I see this stuff all the time, and yes the misprint is a joke, one I'm sure you'll get.

How fun!!! I love these critters. Makes me want to take up flying. Haha! Terrific job.

This is a sweet illo.! great job! the gators totally have a personality of their own!

Dear Shane you are awesome! My husband managed this band for many years and i know the meaning of this phrase, it means "Smog". That's what they are implying in "Aligator Lizards in the Air". We were talking about this song the other day and John said only very new born babies have not heard this song. Love your very clever and well done painting!!!

This is great. Love the colors of the sky and the expressions.

Lotta nice work on this site.

The expression on these guys is great! I love the cranky one with the parachute. Beautiful work.

I wondered about that lyric, too....thanks to ValGalArt, now we know! Makes sense...LA smog, Ventura highway...that gator/lizard with the parachute looks peeved that he had to take the boring way down when his friends are having a blast!! haha! Great artwork, Shane!

This web site
http://www.everything2.com/index.pl?node_id=691587
analyzes the song lyrics in depth, and says there really are such things are alligator lizards. I wonder if they sometimes live up in trees ("in the air").

Hehe nice pic, but I think the "alligator lizards" are cloud shapes. ;p

I always thought the "alligator lizards in the air" referred to the lizard like visions enduced by psychedelic drugs like peyote that were pretty common in those days. Same reason Jim Morrison of the Doors is the lizard king. However I've heard the band always denyed the idea. You can see a good example of the typical visions here http://youtube.com/watch?v=3lnJ0uvbSK8

Awesome! These look like they came out of real cartoons!

Growing up in Southern California we actually had Alligator Lizards. They're lizards that'll clamp onto anything. One time a boy down my street was walking around with two hanging from his ears. He regretted it when the bruises showed up...