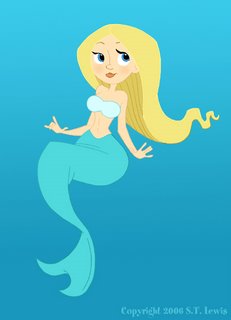 It has been widely suggested that manatees (or "menatee") could be behind the myth of the mermaid. Sailors who were unfamiliar with manatees may have seen them and mistook them for the mythical, human-like species. A manatee surfacing in a patch of seaweed could have appeared to be a mermaid with long, flowing hair.

How much ocean water do you have to drink before manatees begin to look like attractive, young maidens? And if ocean madness isn't to blame here, how ugly were the women these mermaid-discovering sailors left at port if "woman" was a logical title for the first sea cow they ever saw draped in seaweed?

I should have drawn what the sailors were actually seeing, but I wanted to draw a pretty mermaid instead. Maybe another day.
Posted by S.T. Lewis at 7:58 AM

I've got the cabin fever!

See, I'm glad you brought this up because now I know I am not the only one who fell for this mirage. I actually lived with a manatee for a few years until one day during a fight she yelled: "Oh yeah, well I'm not even a mermaid!!!". I'm still not over her.

She's so cute! Her face looks like Lindy's. I know I haven't seen you guys for a little bit and she has brown eyes I think, but it looks like a little blond Lindy Mermaid to me. Did she pose for this for you? I am pretending I posed for Seth's mermaid drawing, but then that would be really embarrassing. OK nevermind about that tangent.

very nice, now you need to draw a sailor trying to pick up on a sea cow with flowing seaweek hair.

Good choice Shane. She's much prettier than a sea-cow with seaweed draped down her back. Yeesh!

awesome Sir Lewis! Would be fun to see a version of the sailors droolin over the manatee with the sea weed hair. Thanks for the entertainment

Maybe they made the whole mermaid thing up because they make for better ship decorations than manatees. Could you ever picture a sea-cow on the bow of a ship? It'd be the laughing stock of the seven seas.

She's cute and all, but I wanna see the manatee and sailors too.

well. i wrote some big long attempt at jokes about being at sea for years without...uh...companionship, but it got a little to R rated, so:

Funny entry, and a cute illustration.

Nice blog! I like your cartoon style. I love the mermaid ^^

very nice, cute as a button one might say