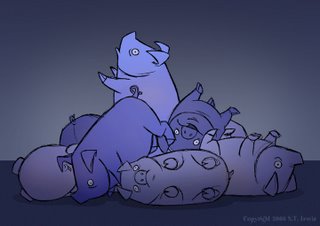 While staying in a motel in Universal City on Monday night, I saw the greatest thing ever on the news... a story that began as a boring traffic report. Cars were backed up for miles on the Golden State Freeway near Sylmar (about 25 miles north of Los Angeles), after two trucks collided, causing the cargo of one to be scattered over 80 feet of several lanes of freeway. That truck's cargo? Frozen pigs.

I hate when traffic is caused by drivers slowing down to check out the scene of an accident, but in this case I fully endorse it. You can't just drive by hundreds of frozen pigs on a freeway... that's against every natural law on this planet. Once I was passing through Vegas and found a section of the freeway littered with cheap, plush bears wearing backpacks... even ran over a couple. Before Monday night, that was the coolest cargo spill I'd ever seen. But the frozen pigs blew away the backpacked bears. These should be the names of sports teams... I can totally hear that last line as an intro on SportsCenter.

What a waste of pigs... right? Aren't they all inedible now? Didn't they all die in vain? No! Without their sacrifice, what would I have laughed at on TV Monday night? "Studio 60?" Hardly. Tuesday morning I had several strips of bacon for breakfast in memorial... nay! In celebration!

Thank you, frozen pigs. And thanks to the gentleman who drove the plow that shoved you all into the roadside ditch. You all presented a level of entertainment that Monday-night NBC refuses to provide. Frozen pigs on the freeway... wonderful in so many ways... one of which is not "smell." (Or so it was reported by the unfortunate news woman who was on location to cover this story as the spilled cargo began to thaw).
Posted by S.T. Lewis at 11:25 AM

That's funny. Imagine if they were alive. That would be even funnier, assumming they live through and then run around. Traffic would be even worse.

The funniest part is how serious the reporters are in the video.

OMG that was really funny. What a great kick ass post. If only they were zombie pigs.

ah, shane, i miss hearing this stuff straight from your mouth. but reading it almost as good.

Okay, that is hilarious Shane! I think I would have picked up one of those pigs on the freeway, free pig doesn't come your way very often.

Poor pigs :( But very awesome drawing of the poor pigs.

Ewwwwwww. Brilliant. Also, it appears that many of the pigs were frozen alive, and in a state of extreme fear. That's just wrong.

reminds me of the "pass the pigs" dice game.

This explains why that piece of bacon I ate yesterday had gum and a rusty bolt on it.