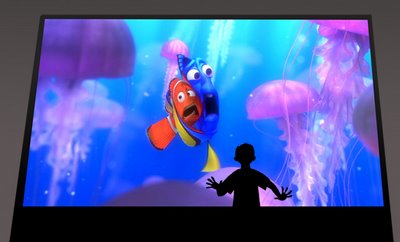 Last Friday we got a 62-inch TV. I was at work when it was delivered so when I got home, I went straight to our family room. When I saw the giant thing... I laughed. Compared to the size of that room, our TV looks absurd. 62-inches isn't the biggest TV you can buy, but in a room where the furthest you can sit from it is about 10 feet... well, it's ridiculous. And I love it! We watched Finding Nemo that night. As the fish swam across the screen, I had to turn my head to follow. Wonderful!

I also played XBox. In Star Wars Battlefront, the Battle Droid I was using was about two feet tall. I could see Clones hiding in the brush from a few hundred yards away. I played Burnout, and the car I was driving was bigger than my actual car.

I've accomplished nothing since the TV's arrival... unless you count watching TV, in which case I've accomplished a TON. Why do we even have a family room... or a house, for that matter? It's all just somewhere to watch TV. Bring on football season!

Also... today is my 3rd anniversary. So happy anniversary to my lovely wife, to whom the last three years has probably seemed like 40.
Posted by S.T. Lewis at 8:25 AM

congrats on the anniversary. ( as well as the slick tv! )

Congrats on the anniversary... 3 years! Wow, it would be nice to be young again- my wife and I will hit the 15 year mark in September. Thanks for the nice comment on the indian painting on my blog! Keep rockin' your work is great!!!

Speaking of Big Figs - he ordered a new one yesterday. It's the Mad Hatter pouring tea into a cup.

wow..thats a nice tv..but your drawings are even nicer! totally awesome designs man...very inspiring. keep it up!

Happy Anniversary! And congrats on the TV...can I have it?

Very funny staging, makes your "two second" drawing look amazing. Crazy how when something is well thought out, we can keep it simple, and it works better then if it was really detailed and over-the-top. "Meet me half way, do do do do... across the sky..."

"Out where the world belongs to only Joe and I."

Thank you all for the anniversary greetings. How does my wife even know what it's like to be married for 140 years? That's ridiculous. When she asked if I love the TV more than I love her, I said, "I love you the same." Don't say that... unfortunate and immediate consequences.

Kevin... you can't have my TV, but if you stand on your front porch and look south, you should be able to see it.

1. Holy crap! Huge TV!
2. 3 Years? I worked with you about that long, so I know how big of an accomplishment that is for your wife.
3. Dory and Marlin look like they're scared of widescreen.
4. Can I come over and watch "Over the Top"? The big rigs will be lifesize!

Whoa- congrats for it all!

Congratulations! On the Anniversary, not the Television... though that's a big deal too. Compared to my 22" that must seem like having Ireland in your living room when watching the Travel Channel. I hope you have surround sound.

Happy late anniversary & congrats on the GIANT tv! Football season is going to be AWESOME in that room! Where do you live again??? ;)

Wicked. I got a 61 inch TV right after Xmas. I live in a one bedroom apartment, and it's SUPER huge compared to anything else I've ever had. I watched Late Night with Conan in HD and I could see where his make-up was applied. That was frickin' sweet! Football rocks too! The grass looks so green that it appears almost fake. It's especially fun when someone turfs head-first after a play, you can see the detail of the piece of sod clung to their helmet. Oh, happy REALLY belated anniversary...