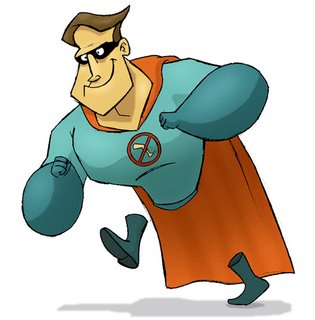 It’s a good thing there’s Toon Club, or what would I ever post on my blog? I’m planning on getting around to doing something original soon, but for now it’s another double dip from Toon Club… this week’s topic: “Unnecessary Superheroes.”

I had several ideas when I began to sketch. There was The Check, who painted big, red check marks on stuff he came across... a cow, a garbage can, a police officer. He was basically compiling a checklist of things he’d seen without the paper-wasting practice of using a list.

Then there was The Elevator… a muscle-bound bellhop with a cape.

I had also considered Disapprover. He didn’t do anything to correct injustices – he just watched in the distance with arms folded, shaking his head.

I actually liked my sketch of Action Pig. He had no powers at all... just a name and a sketch. Maybe I'll post him on here someday.

Mr. Invisiblegs was born of laziness. Since I wasn’t sure which of those ideas I was going to go with, I just started sketching some designs of random superheroes that could pass for any of the ideas. On my fourth sketch, I came up with a head and upper body that I thought were working okay… so I quit. Fill in the cape, and there you go – Mr. Invisiblegs. Sometimes “lazy” is the key ingredient to an okay idea. This is the only example I can think of.

When he's not in his superhero costume, are his legs still invisible? Because that would suck for his secret identity.

I love the logo on his chest, by the way!

If his cool logo is against legs, does he make it his duty to rid the world of them?
Who needs legs anyways right?*cringes*
Your pic made me laugh! Thanks

The fact that he's got these mammoth arms and itty-bitty hands cracks me up. And the look of smug reassurance is hilarious. He's got invisible legs for crying out loud. What advantage is there? You crack me up Shane.

Are his feet invisible too? If they were he could totally take his shoes off and pretend he's a ghost floating in the air... especially if he put a sheet over his visible parts. He could change his name to "The Ghost" and scare criminals. I'm just trying to help.

He could be an awesome kick boxer. i mean, you'd never see where it was coming from.

Hey that guy doesn't have any britches on! So much for a family atmosphere...

Now THAT's a superpower that you can count on. :-)

could make doing an irish jig that much easier, fun!