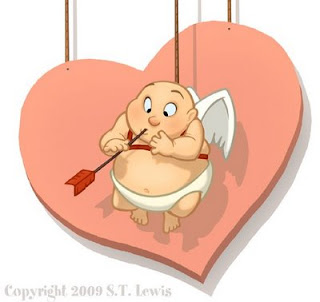 The whole idea of "Cupid" is just absurd... a baby who shoots arrows at people so they'll fall in love? First of all, a baby would never shoot an arrow. If babies had arrows they would eat them the way they eat everything else. Secondly, babies don't fly, because that's creepy. Cupid is weird.

The more I considered what I thought I knew about Cupid, the more I doubted that my perceptions could be true. I decided to learn more about it, so I looked up "Cupid" in the dictionary, and I kid you not... the actual definition is just one word: "stupid." If you don't believe me, look it up yourself... but not in Webster's Dictionary. He gets a little wordy for my liking. I prefer Rhyming's Dictionary. He keeps his definitions brief.

Happy Valentine's Day to my beautiful wife!
Posted by S.T. Lewis at 9:25 AM

Hilarious! Always thought there was something a bit off about that evil flying baby.

That's got to be one of the cutest Cupid pictures. Your drawing makes him look less creepy.

I love that cartoon!! Hilarious..so true too. I've never been a cupid fan myself...

Ha ha, I love this. The picture is great but the comments are even better! You know, you should become a story artist some day!

I think Cupid could be less of a creep if he were actually baby-like. Perhaps if you could do a more baby-like illustration? I would, but stick figures don't resemble infants either.