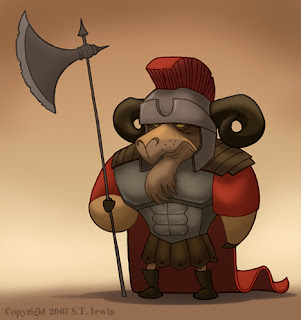 A battering ram is a siege engine... something like a large log, which, when propelled with significant force, is able to crush through walls or break open locked doors and gates. A battling ram is what dumb people call a battering ram.

As long as I'm on the topic of sounding stupid... it's not "I could care less." If you ever tell someone you could care less, please follow that statement up with a list of some of the things you could possibly care less about: CD jewel cases, Jamaican law, discarded staples, etc. If you don't care at all, the phrase is, "I couldn't care less." That means anything is a more compelling topic to you, such as, "I couldn't care less than I do about this lesson in grammar."

I drew this so people who think it's called a battling ram would feel a little less stupid, and then I wrote this to counteract what I drew. This week's Toon Club topic was "Gladiators." I once met a man in Germany who said he was a gladiator in his previous life. As it turns out, the gladiator who killed him in that life is his mom in this life. Small world.
Posted by S.T. Lewis at 1:00 PM

I wonder if that's where they get "assault and battery" from - I always was confused about why a portable power supply was included in a criminal charge - but apparently it dates back to the time period when people attacked one another with "battering rams."

I agree about the "couldn't care/could care less" conversation. As you know, we just discussed how annoying this is to me last night when someone stupid on TV said the wrong one.

I love the ram though. He's awesome. He looks like one of those Palace guards in London - like you could go poke his eyes, and he wouldn't move.

So my "couldn't not don't never care lessness" phrase is probably somewhat wrong then?

Shane, you've got a GREAT sense of humor. I never giggle so much as when I read your commentary. You're arwork is great and is only made even better by your thoughts. Don't not ever stop.....never don't not stop......uhh....keep it up.....please. Later.

Another one that erks me is "Believe you me." What the crap does that mean? So, I've invented one that makes about as much sense: "Believe you, me and the neighbors." Since we're naming everybody anyway, why not throw in the neighbors.

HHahahahHAH!! I come here for drawings but I get awesome comedy. Or is it the other way around? Either way it's a good time.

Nice drawing and yeah haha it must be a small world - I wonder what his relationship with his Mother is knowing she brutally murdered him in his past life.

I love that you met someone that knew he was a gladiator in his past life and his mother was the one who killed him. Man alive I want a friend like that.

Great stuff as always man. Haha, great play on words too. I really like the colors and finish on this.

As an English major at one time, I've decided to simply stop talking to other people. For the love of God...it's your native tongue people,learn how to use it!
Oh yeah..cool drawing!

OH...MY...GOSH.......THANK YOU! The whole "could care less"/"couldn't care less" thing drives me INSANE! Thank you for sharing this extremely important tidbit of info with your loyal public. :-) OK..what the heck? ROFLOL! Did that Gladiator story really happen? How funny. I would have had the hardest time keeping a straight face. LOL! Poor crazy man.

Shane I could care less but I don't. You're battling ram is great, I'm somewhat glad you didn't draw a battering ram. You really make me chuckle.

It looks quite funny and you did a great job with it. If I am not wrong. It is like a goat or something similar.